Bernard Tomic will be seeded No.1 at this year's Apia International Sydney as part of a superstar field announced for the tournament in the Harbour City. 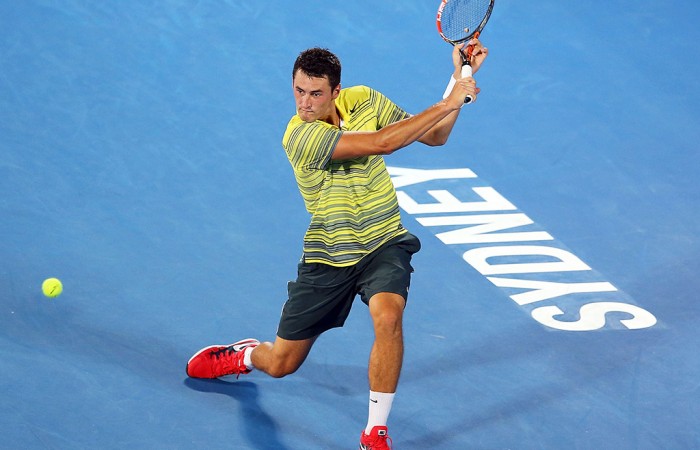 Australian No. 1 Bernard Tomic (Qld) and 2014 Wimbledon semifinalist Grigor Dimitrov (BUL) will join two of the ATP’s biggest rising stars and five of the world’s top 10 women for a blockbuster week of tennis at Apia International Sydney from 10-16 January 2016.

A career-best year on tour which has seen Tomic finish 2015 as the top ranked Australian player has also secured him the event’s top seed, which will make the former champion and Sydney favourite the player to beat.

He leads a trio of next generation stars in the men’s field, with 22-year-old world No.20 Dominic Thiem (AUT) and 2014 ATP Star of Tomorrow Borna Coric (CRO) the future stars heading to Sydney.

In the women’s draw, world No.2 Simona Halep (ROU) is joined by No.5 and 2013 champion Agnieszka Radwanska (POL), defending champion and world No.6 Petra Kvitova (CZE), No.9 Lucie Safarova (CZE) and No.10 Angelique Kerber (GER).

Grand Slam champions Sam Stosur (Qld) and Svetlana Kuznetsova (RUS) will also hit the court in Sydney, while world No.14 Belinda Bencic (SUI) – one of only three women to beat Serena Williams in 2015 – will look to continue her fine form in the Harbour City.

With a main draw cut-off of 32, it is one of the strongest women’s fields on the WTA Tour.

Tomic enjoyed his best season on tour in 2015, starting the year with a quarterfinal appearance in Sydney before advancing to the fourth round at the Australian Open. He defended his title in Bogota and made the quarterfinals at Masters events at Indian Wells and Shanghai, going down to world No. 1 Novak Djokovic in both instances.

A champion in Sydney in 2013 and finalist in 2014, Tomic said Sydney had quickly become one of his favourite stops on tour.

“Sydney is definitely one of my favourite tournaments of the year. It was where I won my first title and I always seem to play my best tennis there,” said the 23-year-old.

“The crowd is always fantastic and Ken Rosewall Arena has started to feel a bit like home court advantage for me now. I’m really looking forward to coming back in January and hopefully I can once again play some great tennis as I prepare for the Australian Open.”

Dimitrov, who has drawn repeated comparisons to Roger Federer thanks to his picture-perfect single-handed backhand and playing style, will play in Sydney for the first time since 2013.

The world No.28 is looking to return to top form after a standout 2014 led him to the quarterfinals of the Australian Open, semifinals of Wimbledon and fourth round of the US Open.

“I haven’t played in Sydney for a few years so I can’t wait to get back there,” said the 24-year-old.

“It’s always a very tough week with no easy matches, you’re playing some great players from the first round so it’s important to be focused and ready from the first match. I’ve been working hard over the off-season and I’m hoping a good tournament in Sydney will help me get back to my best tennis and kick start a great 2016 season.”

Thiem and Coric are both predicted to rise to within the world’s top 10 before too long, with Thiem the youngest player in the top 30 and Coric the youngest in the top 50. For both, it will be their first time at the Apia International Sydney.

“Last season was amazing for me, winning three titles, and I’m hoping to continue that success in 2016,” said No.20 Thiem, who won in Gstaad, Umag and Nice.

“This will be the first time I’ve played an Australian Open lead up tournament in Australia so I’m really looking forward to coming to Sydney. Everyone says it’s an amazing city and Australian fans are some of the best in the world so I really just can’t wait to get on court.”

In only his second full year on tour, 19-year-old Coric defeated then world No.3 Andy Murray to reach the semifinals in Dubai, while also making the semis in Nice and reaching the third round of the French Open.

“I’m really excited to be playing at the Apia International Sydney for the first time,” said Coric. “It always has a really competitive field so I’m hoping to play well there and get the best preparation for the Australian Open.

“I had a good year in 2015 and will take a lot of motivation into next season. I’m looking forward to coming to Sydney and getting my year off to the best start.”

NSW Minister for Trade, Tourism and Major Events and Minister for Sport, Stuart Ayres, said the Apia International Sydney will be a must-see event for tennis fans.

“Once again the Apia International Sydney has attracted a world class field, and promises to attract thousands of fans to Sydney Olympic Park in January. I am pleased this tennis event has been secured for Sydney by the NSW Government, through our tourism and major events agency Destination NSW, and encourage all sports fans to book their tickets today.”

Tournament Director Alistair MacDonald said the high calibre of players heading to Sydney would ensure a stellar week of tennis.

“We’re very happy to be able to welcome our defending champions Viktor and Petra back to Sydney as well as a crowd favourite in Bernard. On top of this, we have one of the best women’s fields on tour once again and a proven performer in Grigor Dimitrov.

“When you add in players such as Simona Halep, Agnieszka Radwanska, Dominic Thiem and Borna Coric it makes for an incredibly exciting and talented field.

“With live music, an increased entertainment schedule and the return of legends, this should be an absolute blockbuster week of tennis in Sydney.”

Apia International Sydney single session tickets and series packages are now available. In an exciting new initiative, all event tickets will include an integrated train ticket valid on the Sydney Trains and NSW TrainLink Network. All tickets are subject to Sydney Trains Ticket Recognition Requirements, which can be found at www.apiainternational.com.au/