Dayne Kelly is looking to the future with positivity following his triumph at the 2015 Tennis Wollongong International #2. 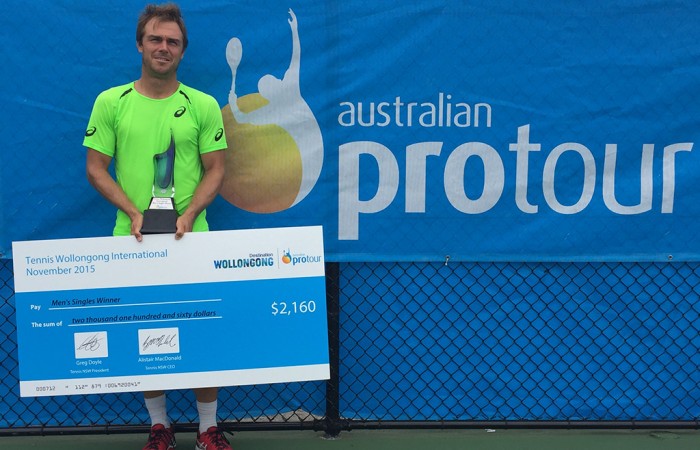 “It’s good to finish the week off strong,” Kelly said.

After taking the first set in a decisive tiebreaker, the eighth seed maintained his aggression with some big-hitting from the baseline, creating a single break in the second to earn the title 7-6(1) 6-3 in a little over 90 minutes.

“I just kept backing myself and committing to the game plan,” Kelly added. “It didn’t matter what the score line was, I kept going for my shots and it paid off.”

Kelly, 25, was also successful over the higher-ranked Queenslander in the opening round of Wollongong #1 last week, in a match that required him to come back from a one-set deficit to post the win.

“It gave me a bit of confidence, but I’m sure it made him very hungry as well,” Kelly said of that encounter.

The world No.639 has shown some solid form throughout the current Australian Pro Tour, which included a run to the semifinals in Alice Springs.

“I was only one point away from making the final there and I’ve had a few other good weeks as well,” he said. “But some of the guys are playing really good tennis at the moment.”

Kelly is looking to the future with an air of positivity.

“I’d like to commit to a full year, which I haven’t done for about five years,” he said. “I’m more motivated than ever to dedicate everything I need to in order to be the best player I can be.”