Marc Polmans has reached the first ITF Futures semifinal of his career and will face Maverick Banes in a bid to extend his Wollongong campaign further. 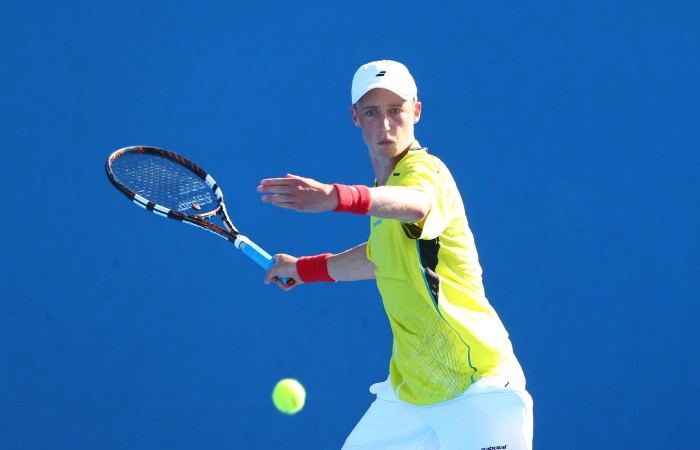 Marc Polmans, 18, has reached the first Futures semifinal of his fledgling career after defeating sixth seed Jacob Grills at the Tennis Wollongong International #2 on Friday.

“It feels great,” Polmans said of the victory. “It’s a big step.”

After coming back from a one-set deficit, the unseeded Victorian ranked world No.986 lifted his intensity, taking the next two tiebreakers to win 3-6 7-6(1) 7-6(4) in a match that lasted over three hours.

Polmans has come into his own this week in Wollongong, his quarterfinal win over Grills proving to be an exclamation point on his upset win over third seeded Kiwi Jose Statham in the previous round.

“[Statham] is one of the highest-ranked players I’ve beaten for a long time,” he said. “It was one of the best matches I’ve played all year.”

Polmans feels he has been building some momentum over the course of the current Australian Pro Tour, despite not making his way overly deep into draws.

“I’ve just lacked a bit of execution, that’s all,” he said. “I’ve lost a lot of close matches but most of them I felt like I had on my racket.

“The last few days it’s really been working. It’s the way forward for me so I will try and keep it up.”

Polmans will now face Queenslander Maverick Banes for a place in the final. The fifth seed wasted no time in dispatching wildcard Daniel Nolan 6-1 6-1, continuing his quick progression through the tournament so far.

While Polmans lost to Banes seven weeks ago in Alice Springs it was a relatively tight score line (6-4 7-6) from which the teenager can draw some confidence.

“It was very close, I served for the second set and I had my chances,” he said.

Later in the day, Polmans backed up his performance in singles by pairing with Steven de Waard to take out the doubles title.

While Polman is hopeful his legs recover in time to meet Banes on Saturday, the other singles semifinal will be played between eighth seed Kelly – who took out qualifier Zach Itzstein in straight sets 6-2 6-1 – and second-seeded Czech Robin Stanek, who was pushed in the second set by last week’s finalist Sebastian Fanselow of Germany before winning 6-2 7-6(5).