John Peers and Jamie Murray may have lost their latest round-robin match at the ATP World Tour Finals, but they remain in contention for a semifinal berth. 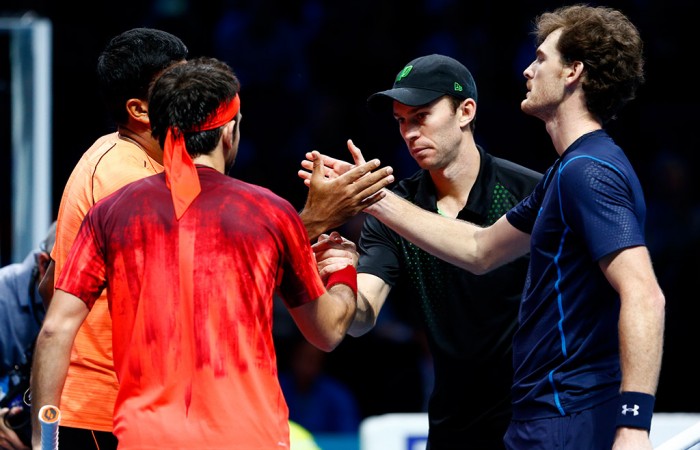 India’s Rohan Bopanna and his doubles partner Florin Mergea booked their place in the World Tour Finals last four on Tuesday with a straight sets win at London’s O2 Arena.

The eighth-ranked side beat home favourite Jamie Murray of Great Britain and Australia’s John Peers 6-3 7-6(5), the fourth-ranked pairing, to secure a semifinal spot.

“Didn’t go as planned. They played a very solid match and we didn’t take any chances we had. We were always playing catch up so that didn’t help,” Peers reflected.

“We got back into the match after they served at a set and 4-3. We did great to hang in there and almost give ourselves a chance to get through that one. Bopanna played a very high quality match.”

Bopanna and his Romanian partner beat US identical twins Bob and Mike Bryan, the reigning champions, in their opening group game on Sunday.

They have a third and final group game remaining against Italian partnership Simone Bolelli and Fabio Fognini before the semis.

Peers and Murray next face the Bryan brothers in their final round-robin match; should they win, they would qualify for the semifinals.

“Jamie and I didn’t play as well as we did in our first match but luckily with this format we still have a chance to go through if we take care of our next match,” Peers said.

“It will be an exciting match (against the Bryans) and we will play on Thursday at some stage. I am very much looking forward to playing again.

“The venue is fantastic and it’s great fun playing in front of such a big crowd.”