Another Grand Slam quarterfinal, more top 10 scalps and a first career ATP final were all highlights for Nick Kyrgios during a potent 2015. 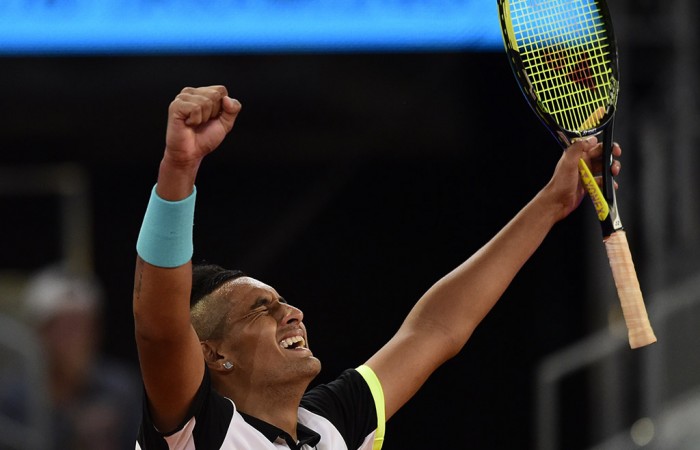 Nick Kyrgios may have played somewhat sparingly in 2015. Yet whenever he took to the court, he invariably made an impact.

The young Canberran, one of the brightest Australian tennis prospects in years, broke through in 2014 with his stunning victory over Rafael Nadal en route to the Wimbledon quarterfinals. He quickly proved that was no fluke.

Just two major tournaments later, in front of his home fans at Australian Open 2015, Kyrgios backed up that performance with a second Grand Slam quarterfinal, made possible by an incredible five-set victory over Andreas Seppi in the fourth round. It was a match described as one of the highlights of the tournament, played before an atmospheric, packed crowd at Hisense Arena.

“I don’t think it’s sunk in yet. When I saw I had finally won the match it was incredible. It was the best feeling I ever had,” Kyrgios said. “To know the body could come back from two sets to love, knowing I haven’t had matches, it’s just massive confidence.”

Indeed, Kyrgios embarked on the Australian summer of tennis unsure of how his body would respond. He had terminated his 2014 season prematurely due to an arm injury and withdrew from the Hopman Cup because of a back problem. And despite playing one of the lightest schedules of anyone in the top 100 – contesting just 18 tournaments – his 2015 season ended in almost identical fashion, an arm injury ruling him out from October onward.

Prior to that, and following his Melbourne Park heroics, there were still plenty of highlights.

The 20-year-old progressed to his first ever ATP final on the red clay of Estoril, Portugal and a week later scored a magnificent three-set victory over world No.2 Roger Federer at the Madrid Masters on his way to the third round.

.@NickKyrgios 6th player to beat @RafaelNadal & @rogerfederer in 1st time meetings but only one to accomplish feat while both were Top 10.

You could take it a step further with that stat – Nadal and Federer were respectively ranked world No.1 and No.2 at the time Kyrgios defeated them.

Kyrgios translated his potent claycourt form into a third-round finish at Roland Garros and immediately after the tournament peaked at a career-high ranking of world No.25.

And when he turned his attention to his beloved grass courts, more success followed. He stormed into the second week at the All England Club for the second successive year, exacting revenge on world No.8 Milos Raonic for his quarterfinal defeat to the Canadian 12 months prior.

It was the second of three top 10 wins for Kyrgios during the year.

“I feel as if physically, (there have been) massive improvements. I wasn’t struggling at all. If it was to go into a fifth, I would have still felt confident,” he reflected. “I didn’t want to lose again, I lost to him twice at Grand Slams. I thought it was a good day. I played some really, really good tennis.”

Kyrgios was unlucky to draw the evergreen third seed Andy Murray in the opening round of the US Open, falling in four sets to the same player who had stopped him at Melbourne Park in January.

During an impressive Asian swing in which he reached the semifinals in Kuala Lumpur and quarters in Tokyo, he came close to scoring a fourth top-10 scalp when he pushed Kei Nishikori to 6-4 in the third set of their second-round match at the Shanghai Masters.

With a longer off-season giving him the chance to restore both body and mind, 2016 could be another stepping stone in what appears to be an inevitable climb towards the top of the game.