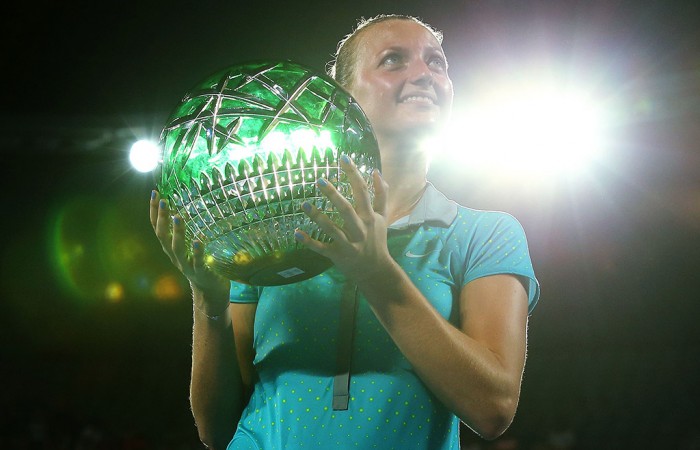 Three of the biggest-hitting stars in women’s tennis will return to Apia International Sydney in 2016, bringing their talents to Sydney Olympic Park Tennis Centre from 10-16 January.

Defending champion and world No.6 Petra Kvitova (CZE) will be joined by one of the most exciting players on tour in world No.2 Simona Halep (ROU) as well as Australia’s top ranked female Samantha Stosur (Qld).

Kvitova, who toppled countrywoman Karolina Pliskova in a tight 2015 final, enjoyed a strong season with two more titles in Madrid and New Haven as well as a runner-up finish in her fifth straight WTA Finals in Singapore.

The 25-year-old admitted she was spurred on by entering the tournament in 2016 with the mantle of defending champion.

“As the defending champion there’s so many nice memories and I’m really looking forward to it,” she said.

“It’s something really special and gives you confidence that you did so well last year in the tournament. I just defended my title in New Haven so finally I know how to do it!”

Halep carried a strong form from 2014 through to this year, winning three titles in Shenzhen, Dubai and Indian Wells as well as advancing to the semifinals of the US Open to finish the year as the second ranked player in the world.

“Sydney is a great tournament, it’s very tough, everyone is playing well. It’s like a Grand Slam, you can face top players in the first round but I hope to be ready to start the tournament in a good position and play my best tennis there,” the 24-year-old said.

“I’m really happy to go back to Sydney, I’ve played there a few times. Last year I didn’t feel well and I couldn’t play but this year I want to be 100 per cent and to win matches.”

Sydney has become a regular stop for Stosur in her preparations for the Australian Open, with the Coogee local accustomed to the home-court advantage.

“I’ve played some great matches in Sydney and had some really exciting matches on that court so it’s always nice to head back to play again,” said the world No.27, who will be making her 10th appearance at the event.

“The Sydney tournament always gets unbelievable cut-offs, everybody’s looking for those matches leading into the Aussie Open and you’ve got to play someone usually in the top 25 straight up.

“Nothing’s easy there but it’s certainly a good chance to see how you stack up against the best in the world.”

Tournament Director Alistair MacDonald said it was exciting to once again have the world’s top female players choosing to complete their Australian Open preparation in Sydney.

“The Apia International Sydney has had one of the most competitive women’s fields on the WTA Tour for several years now and we’re thrilled that the likes of Kvitova, Halep and Stosur continue to want to play our event,” he said.

“It’s always great to have a defending champion the calibre of Petra coming back to try and make it two in a row and to have the world No. 2 in Simona playing is exciting for the event and for tennis fans in Sydney.”

Apia International Sydney single session tickets and series packages are now available and can be purchased online at www.ticketek.com.au/booksydney or by calling 1300 888 104.