Ben Mitchell recovered from a set down against Luke Saville to capture the first ATP Challenger title of his career in Canberra. 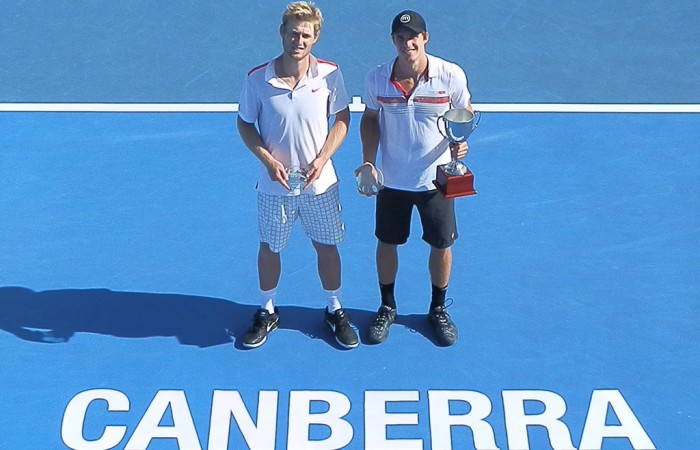 Unseeded Queenslander Ben Mitchell has stormed back from a one-set deficit against fellow Australian Luke Saville to claim his maiden ATP Challenger title at the 2015 Canberra Tennis International.

“I won my first tournament here (in Canberra) when I was nine years old and it’s cool to come back and win a tournament twelve years later.”

With both players starting a little tentatively, it was the Saville serve that made the difference in the opening set, but from that point on it was Mitchell who made all the running, breaking Saville – who did appear to be somewhat hampered by injury – on five occasions to earn the biggest win of his career.

“We were both trying to find our feet a little bit in the first set,” Mitchell said of facing his close friend. “He was serving really well so I kind made a conscious effort to try and be as aggressive as possible in the second.

“I stepped about a metre and half in on return games and tried to put the pressure on him instantly. It kind of had a roll-on effect from there.

“The score line wasn’t a true indication of the second and third sets. I feel like it was a lot closer than that.”

The 22-year-old looked good all week in Canberra – as well as defeating fifth seed Saville in the final, he ousted second seed Matt Ebden in the second round – and will likely return to the world’s top 250 as a result of the title win.

“Most tournaments I’ve played this year I’ve played really well, I just haven’t played too many,” he said, citing ongoing issues with his back.

“I’m not being so lazy in my body management now, and if I can do that next year I definitely feel like I could make the top 100.”