Luke Saville and Ben Mitchell will contest an all-Aussie final at the Canberra Tennis International ATP Challenger while compatriot Kimberly Birrell fell in the women's semis. 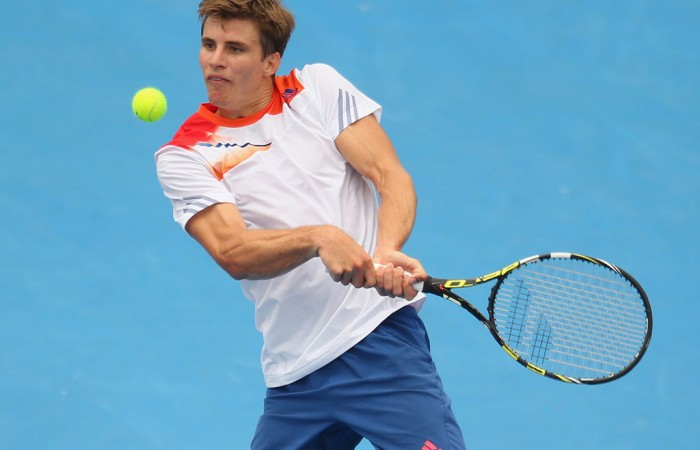 Ben Mitchell and Luke Saville have ensured the 2015 Canberra Tennis International men’s title will end up in Australian hands after each secured comfortable victories in their respective semifinals on Saturday.

For the resurgent Mitchell, the win propels him into his first ATP Challenger final and represents a pay-off for his recent good form, having posted wins over second seed Matt Ebden in the second round as well as Marinko Matosevic in Traralgon last week.

“It’s great getting to a (Challenger) final, especially in Canberra,” he said. “I lived here for four years at the AIS and I have a lot of good memories.”

The Queenslander put on a dominant display in his semifinal against the higher ranked Matt Reid, saving the only three break points he faced and cruising to a 6-3 6-2 victory in just 65 minutes.

“I served and returned well today,” Mitchell said. “I was looking to win that battle and I managed to do it.”

Meanwhile, Saville, the only seed left in the tournament, took on big-hitting Czech Robin Stanek, who has impressed en route to the semifinals.

However, it was the South Australian who took the honours, booking his spot in the final with a straightforward 6-2 6-1 win.

“I have played Luke a lot,” Mitchell said of his upcoming opponent. “We are pretty much best mates, so it’s always a bit strange.”

“But once you get on court, you put the mateship aside. You get used to it.”

Interestingly, despite Saville currently sitting just over one hundred places above him in world rankings at No.203, Mitchell has won five of their six previous encounters, including twice at ATP Challenger level last year – in Granby and Burnie.

In the women’s $50,000 ITF event in Canberra, remaining Australian hopes lay with rising Queensland teen Kimberly Birrell, who was looking to make it consecutive finals after her runner-up performance in Brisbane.

Despite fighting back from a set down and saving match points in the second to push her semifinal against Asia Muhammad all the way, Birrell eventually fell to the American 6-3 6-7(2) 6-2 after almost two and a half hours.