Iconic stars John McEnroe and Pat Cash will go head to head in the inaugural legends match at Brisbane International 2016. 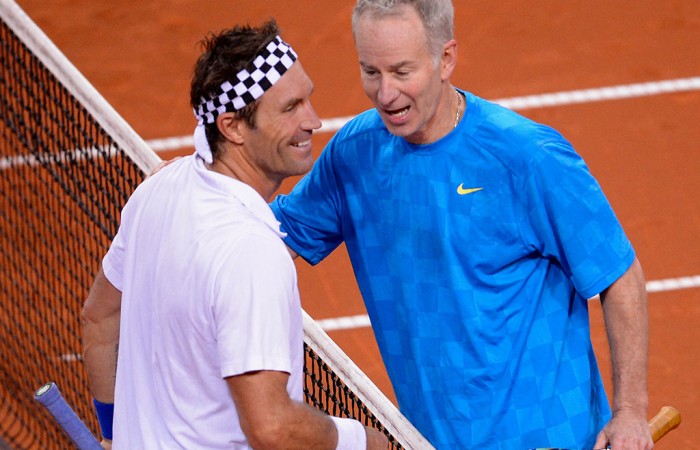 Two of the most iconic players in tennis history will go head to head at Brisbane International 2016 presented by Suncorp.

The pair last met on the ATP Tour in the second round at Wimbledon in 1992, when McEnroe held off his younger opponent in a four-hour, five-set showdown. The former world No.1 retired from professional tennis with a 3-1 edge over his Australian rival.

“I’m really looking forward to returning to Brisbane, it’s been a long time since I played there and it’s really exciting to have the chance to return to play against my good friend and great tennis champion, Pat Cash,” McEnroe said.

“I still love this sport and I still enjoy competing in front of big crowds, especially in Australia where the tennis fans are so great.

“I have played against Pat many times, both on the ATP Tour and more recently at Champions Tour tournaments around the world. The last time we played on the main tour was at Wimbledon in 1992, where it took me five sets to finally get a win. Pat is always a tough opponent so I am really working hard to bring my best tennis to Brisbane.”

As famed for his explosive personality as his tennis ability, the left-hander will join an all-star line-up in Brisbane this summer including the tournament’s two defending champions, 17-time Grand Slam title-holder Roger Federer (SUI) and five-time Grand Slam winner Maria Sharapova (RUS).

“I’ve seen the Brisbane tournament grow over the years to become even more successful, with big crowds and top players like Federer and Sharapova in the field,” he said.

“It should be a really exciting week of tennis and it’s great to join the line-up for 2016.”

Cash will be hoping a patriotic home crowd is on his side when the two tennis legends make their Brisbane International debut in a FAST4 showdown ahead of the women’s final.

“It’s really exciting to join the line-up for Brisbane International 2016. There’s a friendly rivalry between John and I, we still play each other regularly on the legends circuit and it always seems to be a close match,” said the former world No.4.

“Home crowds are always a lot of fun and I’m looking forward to stepping out on Pat Rafter Arena in January. It’s an honour to play in the inaugural legends match and hopefully Brisbane tennis fans will get right behind us.

“John’s a tough competitor, we all know he hates to lose and while it should be a lot of fun out on court, we’ll both be playing to win.”

“Tennis fans are going to love seeing John and Pat battle it out. They’re two legends of the sport who will not only turn on a great match, they’ll keep fans very entertained,” he said.

“January 9 is shaping up as one of the biggest days of the 2016 event, with McEnroe, Cash and our two women’s finalists all in action. It’s sure to be a very popular session so I encourage all fans to book their tickets now and to look forward to a great day of tennis.”