Queenslanders Gavin Van Peperzeel and Priscilla Hon have won big in their backyards with victories at the Brisbane QTC Tennis International. 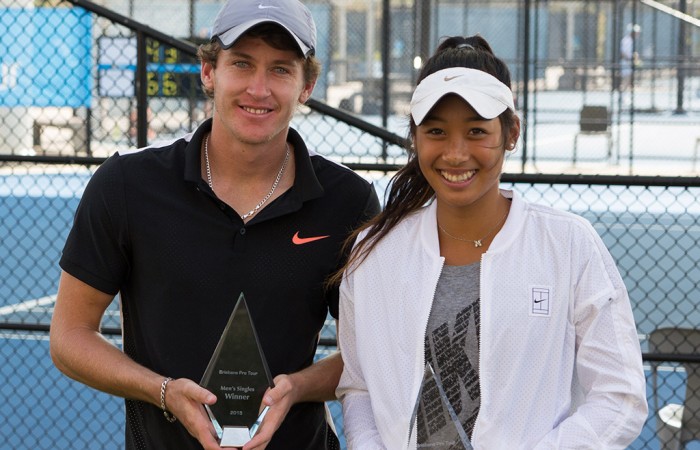 “Getting the job done at home in front of family and friends, it doesn’t get much better than this,” said a delighted Van Peperzeel after winning his third Pro Tour singles title and first on home soil.

The fourth seed took it right up to Saville from the outset, and despite being outgunned on serve – hitting only one ace compared to Saville’s 20 – he managed to stand firm at key moments.

“I knew that to beat Luke I had to play my game and stay aggressive. I backed myself and took my chances when they came,” he said.

After securing the first set in a closely fought tiebreaker, things weren’t looking quite so bright for Van Peperzeel after Saville took the second in a relative canter.

In the deciding set though, Van Peperzeel displayed the steely resolve he had shown early on, matching Saville step for step en route to a final nail-biting tiebreaker.

“I did pretty well to bring my level back up again,” he said. “We both deserved to win. I’m just lucky I won the last point.”

It was a gutsy display from the Queenslander in Brisbane; he saved match points in the second round, came back from a break down in the final set in the quarterfinals and recorded a solid win against fellow Queenslander Ben Mitchell in the semis.

Teenage wildcards Priscilla Hon and Kimberly Birrell made it a dream run for the locals as they each put together spectacular weeks in Brisbane, earning the right to face off in Sunday’s final.

The pair – who train together in Brisbane – clearly knew each other’s style well, but in the end it was Hon who was able to counteract her opponent’s solid ground game; defeating Birrell 6-4 6-3 in just under an hour and a half to take her second ITF Futures title this year after her maiden success in Mornington.