World No.1 Serena Williams and Aussie star Nick Kyrgios join a star-studded field set to descend on Perth in January for the 2016 Hopman Cup. 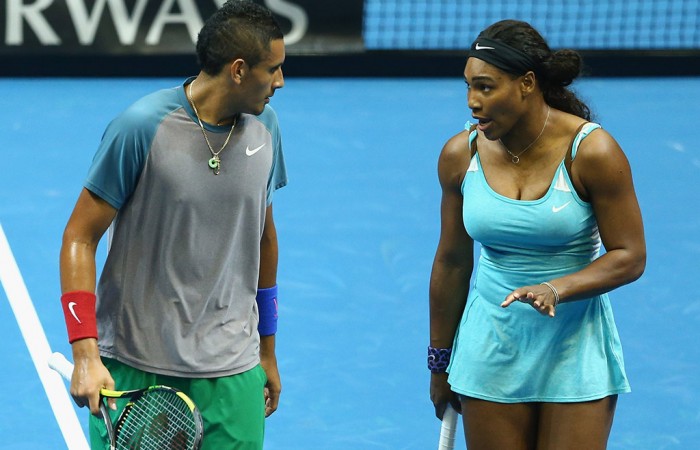 World No.1 Serena Williams, world No.9 Lucie Safarova and Nick Kyrgios are heading to Perth for Hopman Cup 2016.

They join world No.2 Andy Murray, French superstar Gael Monfils and Australia Gold’s Lleyton Hewitt and Casey Dellacqua, as some of the biggest names in tennis are set to battle it out for their country when the event gets underway from 3-9 January at Perth Arena.

In total, eleven top 40 players, including three top ten players, will start the year in Western Australia in pursuit of becoming the 28th Hopman Cup champions.

In 2016 Hopman Cup will host three of the past five Australian Open junior boys’ champions.

Team USA will headline the field as the top seeds with world No.32 and 2014 Wimbledon doubles champion Jack Sock set to partner Williams in January.

Williams, a 21-time Grand Slam singles champion – the third-most of any tennis player, male or female, of all time – is one of the greatest players ever.

The 34-year-old will finish 2015 as the top player for the fifth time and has held the world No.1 ranking for a total of 263 weeks, sitting third all-time behind Steffi Graf and Martina Navratilova.

After starting 2015 at the Hopman Cup Williams went on to win the Australian Open, French Open, Wimbledon and reached the semifinals of the US Open. Her win-loss record stands at 53-3 for the year.

“Perth definitely started something quite amazing so I think it’s only natural and fair and reasonable that I go back to Perth,” said Williams, who reached the 2015 final with John Isner.

“We were so close to winning last year. I’m really excited to be back.

“For me the Hopman Cup is super great preparation for the Australian Open. In 2016 I want to play doubles in Australia so it will be really exciting for me to get there, play some doubles and get some little experience at the Hopman Cup.”

In her fourth appearance at the Hopman Cup, Williams will attempt to become the first three-time champion.

For the first time in the event’s history two Australian teams will line up at the Hopman Cup.

World No.30 Nick Kyrgios will lead the Australia Green team when he makes his debut at Perth Arena.

One of the hottest players on the men’s tour, the 20-year-old broke into the world’s top 30 in June reaching a career high ranking of 25.

The start of 2015 saw Kyrgios become the first Australian teenager to reach the quarterfinals of the Australian Open since Pat Cash in 1984.

He made his first Tour level final in Estoril before reaching the fourth round at Wimbledon and the semifinals of the Malaysian Open earlier this month.

The right-hander is looking forward to playing on centre court at Perth Arena.

“I didn’t get to play this year so I’m really looking forward to just being healthy and getting out there,” Kyrgios said.

“My good friend Thanasi [Kokkinakis] has played there and he told me it’s one of the best places he’s ever played at.

“I do like Perth. We played a Davis Cup tie against Uzbekistan and we won. I definitely feel comfortable there. It’s one of my favourite places in Australia behind Canberra.”

Kyrgios’ partner in the Australia Green team will be announced at a later date.

Czech Republic’s world No.9 Lucie Safarova is making a return to Perth, and will be joined by world No.40 Jiri Vesely, making his first appearance at the Hopman Cup.

Safarova has reached a career high ranking of five and a doubles ranking of four this year, and joins Petra Kvitova as the second Czech female in the top 10 for the first time in 26 years.

The 28-year-old won her sixth career singles title in Doha before reaching her first Grand Slam final at the French Open, toppling en-route the then world No.2 Maria Sharapova and world No.7 Ana Ivanovic.

As a stalwart of the Czech Fed Cup team, Safarova is expected to help the team win their fourth Fed Cup title in five years against Russia in what will be her 20th tie for the country.

Like Kyrgios, Vesely is one of the rising stars on the men’s tour, and a winner of the Australian Open juniors in 2011.

The 22-year-old won his first career title in Auckland in 2015 and broke into the world’s top 35 in April.

Rounding out the 2016 field is Team Germany, represented by world No.30 and 2013 Wimbledon finalist Sabine Lisicki and Australian Open 2014 junior champion and the youngest player in the world’s top 100 Alexander Zverev.

“Serena is one of the greatest female athletes in the world. Since we last saw her she has won three Grand Slam titles and looks to win her 22nd major next year in Australia. We are excited to welcome her back to Perth.

“We will have Nick Kyrgios here in 2016 as well world No.9 Lucie Safarova and Jiri Vesely of the Czech Republic.

“To round out the field we welcome Germany’s Sabine Lisicki and Alexander Zverev to Western Australia for the first time.

“World No.2 Andy Murray and his partner Heather Watson return for Great Britain and we can’t wait to see Lleyton Hewitt and Perth favourite Casey Dellacqua. It will be a special time for Lleyton as he plays for Australia for the very last time,” Kilderry continued.

ITF President David Haggerty added: “In its 28th year, the Hopman Cup attracts the world’s best players to Perth to start the new season of tennis.”

“As part of the Emirates Australian Open Series, Hopman Cup 2016 has an outstanding line-up of players including Serena Williams and Andy Murray.

“The ITF is proud of its association with the Hopman Cup and looks forward to another great week of tennis at Perth Arena.”