Despite a loss to world No.1 Novak Djokovic in the Shanghai Masters quarterfinals, Bernard Tomic is projected to move to a career-high ranking of 18th. 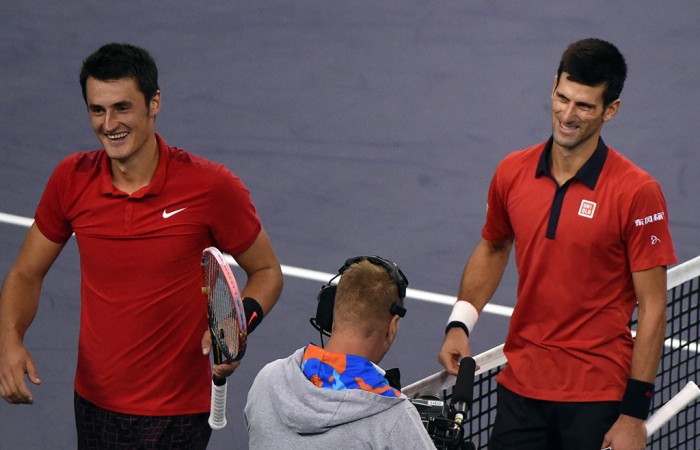 Australian Bernard Tomic’s impressive run at the Shanghai Masters is over, with the young gun outclassed in straight sets in his quarterfinal clash with Novak Djokovic.

It was an impressive start from Tomic on Friday, who managed to stretch the World No.1 to a tiebreak in the first set before losing his momentum, handing the Serb a 7-6(6) 6-1 win.

Tomic nailed five aces and 18 clean winners to save three set points in the tiebreak, but surrendered the first set with a backhand error.

The match was Tomic’s ninth quarterfinal this season.

“I think physically maybe he felt a bit exhausted. Last night he played three sets. He finished after midnight. Maybe that has influenced a little bit his game in the second set,” Djokovic said.

“Then again, I’ve started to read his serve a little bit better, started to move him around the court. The first game of the second set was crucial, I think, making that break.”

Despite the loss, Tomic remains focused on rising up the rankings, he is now projected to reach a career high of No.18.

“For me it was very, very important this first set – after, I think I was dead,” Tomic said.

“I was trying to stay with him but he looked so fresh and so energetic.”

Djokovic will now face off against Andy Murray in the semis, after the Scot overcame heated rival Tomas Berdych 6-1 6-3 to make it three straight victories over the Czech this year.

Earlier Rafael Nadal’s resurgence moved ahead with a 6-2 6-1 win over Stan Wawrinka, setting up a clash with Jo-Wilfried Tsonga who was taken to three sets by Kevin Anderson.