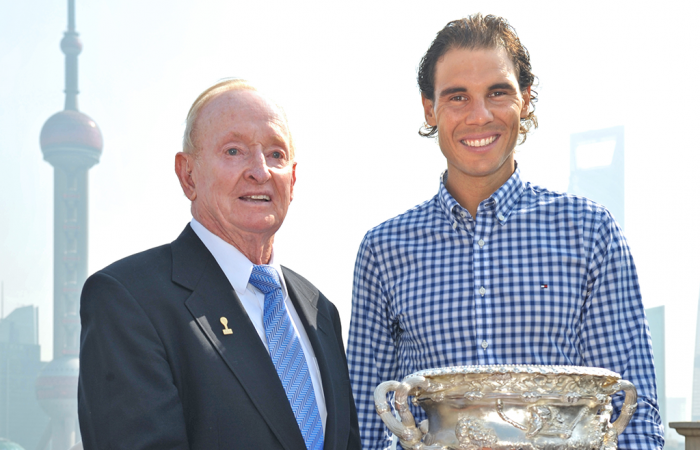 Two of the greatest left-handers in the history of tennis and a fast-rising Aussie star officially kicked off Australian Open 2016 on two continents today.

The legendary Rod Laver and Rafael Nadal, both ‘Friends of the Australian Open’ posed with the Norman Brookes Challenge Cup against the spectacular Shanghai skyline at an Australian Open business breakfast.

Meanwhile in Melbourne, Thanasi Kokkinakis led a parade of 101 ballkids through Birrarung Marr, home of the first ever Australian Open Festival, a free fan and family-friendly initiative designed to bring the city even closer to the event.

Speaking at the official launch event in Shanghai, 2009 Australian Open champion Rafael Nadal – in fine form after reaching the final of the China Open in Beijing – is excited about the first Grand Slam of 2016.

“Every year I look forward to play in Melbourne, I have great memories of not only winning the title but each year is a great experience for me as a player,” Nadal said.

“It’s fantastic to play at the ‘Happy Slam’ and for us, it’s true – we love to play the Australian Open and we’re always happy to be there. It’s exciting to launch the event here in Shanghai. Tennis has become so popular in Asia and it’s great to share our sport of tennis with all our fans.”

Australian Open Tournament Director Craig Tiley announced a range of initiatives guaranteed to make the 2016 event bigger and better than ever for both fans and players.

“Continual innovation and always pushing the boundaries to present the best possible experience for our players and our fans is what the Australian Open is all about,” Tiley said in Melbourne today.

“We also look forward to honouring Lleyton Hewitt as he prepares for his 20th and final Australian Open appearance, and I’m delighted to announce today he will be awarded a wildcard for 2016.”

Initiatives for Australian Open 2016 include:

“The city and the Australian Open are coming even closer together, with the new bridge linking Birrarung Marr with Melbourne Park now under construction as part of the Victorian Government’s continued redevelopment of Melbourne Park,” Healy explained.