Tokyo: Paire too strong for Kyrgios

Benoit Paire has recovered to end Nick Kyrgios' Japan Open campaign with a three-set victory in Tokyo on Friday. 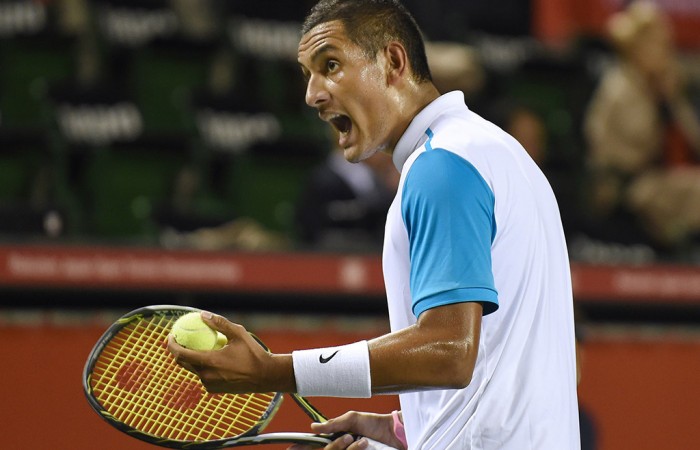 Nick Kyrgios’ path through the Japan Open draw has been halted in the quarterfinals after the Australian went down to France’s Benoit Paire.

Paire won 3-6 6-4 6-1 in Tokyo today, sending him onto a semifinal encounter with defending champ and hometown favourite Kei Nishikori, who survived a war of attrition against Croatia’s Marin Cilic 3-6 7-5 6-3.

Top seed Stan Wawrinka overpowered American qualifier Austin Krajicek 6-3 6-4 to join them in the last four, requiring less than an hour to take care of business.

Wawrinka made no mistakes as he powered past Krajicek in just 58 minutes, and the left-hander had no answer to the rapier-like ground strokes of the French Open champion.

“I felt a bit more relaxed today and confident with my game,” said Wawrinka, who is chasing a fourth title of the year and the 11th of his career.

“A one-hour match, it was the perfect day for me today.”

Second seed Nishikori was greeted like a rock star by 12,000 screaming fans but Cilic, who beat Japan’s golden boy in last year’s US Open final, had failed to read the script and quickly seized the initiative with some thunderous hitting.

Cilic’s game unravelled under the onslaught in the decider as Nishikori caught fire, breaking for 3-1 and closing out the quarterfinal with an ace after two hours, 11 minutes to ensure ‘Nishikori Fever’ stretches into the weekend.

“When I drove past all the fans on the buggy after practice this morning, I thought: ‘This is what it must feel like to be a lion in a zoo’,” joked Nishikori, who is regularly mobbed on his return to Japan.

“The wind made it difficult today but I hung in and waited for my chances,” added the Japanese superstar. “I had a couple of dangerous moments out there but that happens.”