Sam Stosur took her career record against Monica Niculescu to a perfect 7-0 thanks to a straight-sets win over the Romanian in Beijing. Andrea Petkovic is next. 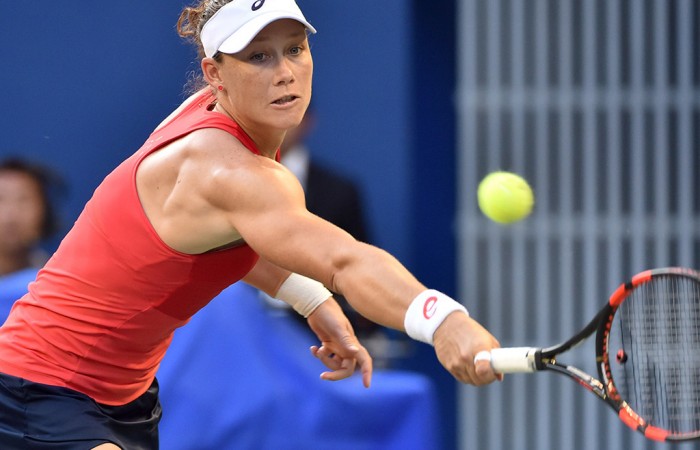 Sam Stosur has kicked off her China Open campaign on the best possible note with a comfortable win over Monica Niculescu.

The 6-3 6-2 victory was her seventh in seven career meetings with the Romanian, setting up a second round stoush with 13th seed Andrea Petkovic, who advanced when Canada’s Eugenie Bouchard retired with dizziness.

“It’s going to be another good opportunity for me to play,” Stosur said.

“I don’t necessarily think Petko has been this year or recently winning as many matches as what maybe she was a couple of years ago … but we’ll see. Last time I played her was in Fed Cup in Germany and I lost. That was a heart-breaker.

“No matter what I obviously have to be ready to go.”

Stosur stormed to a 4-1 lead over Niculescu at the National Tennis Centre’s Moon Court, troubling the world No.46 with her heavy forehand and superior power.

After closing out the opening set in 32 minutes, the Queenslander had a chance to break serve to start the second when she reached 15-40 in the opening game.

Although Niculescu survived to hold serve, her resistance did not last long; Stosur broke serve in the fifth and seventh games to open up a 5-2 lead.

She closed out the match with a flourish, belting four consecutive winners to hold at love and cement her place in the second round.

“I felt comfortable going out to play her. Obviously I do have a good record … she’s got a game that can be tricky but I think with the way I like to play it doesn’t bother me too much as long as I stay patient and clear with what I want to do,” Stosur said.

“I had lots of break point opportunities. I could’ve broken again at 5-2 in the first set and things like that … I guess the second set was a lot easier than the first. Overall I was happy with the way that I played.”

Asked whether she could repeat her semifinal exploits of last year’s China Open, Stosur’s response was “why not?”

“Sometimes you can start a tournament terribly and before you know it you just win matches and that in itself makes you play better and every day you get through a match you give yourself another opportunity,” she said.

“I feel like I’m hitting the ball well enough, I quite like the conditions here and all that, so yeah. I’ve done it once. I think I can do it again.”