Ivanovic too strong for Dellacqua

Ana Ivanovic reeled off 10 straight games in a commanding performance to eliminate Aussie Casey Dellacqua from the opening round of the China Open. 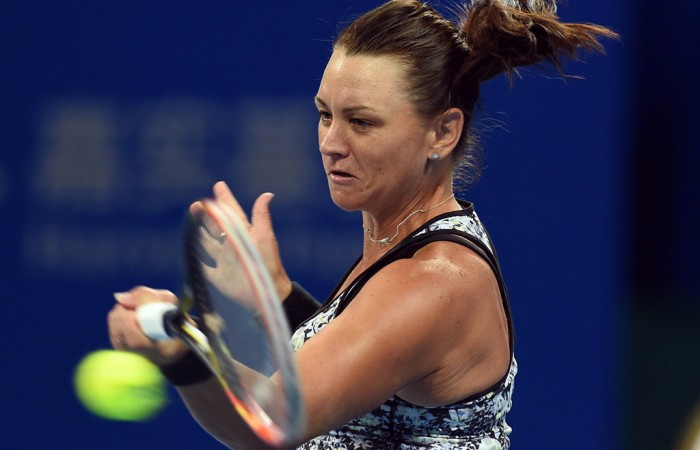 Casey Dellacqua’s China Open campaign has come to an end at the hands of a surging Ana Ivanovic.

Dellacqua, a main draw wildcard, fell 6-4 6-0 to the No.6 seed on the tournament’s Diamond Court on Saturday night.

The Aussie twice broke Ivanovic’s serve in the first set of their opening round clash but failed to capitalise and was bundled out of the tournament in just over an hour.

Serb Ivanovic didn’t dare discuss her chances of reaching the end-of-season WTA Finals on Saturday despite making a rip-roaring start to her Beijing campaign.

After a slow opening, the former world No.1 reeled off 10 games in a row to beat a shell-shocked Dellacqua 6-4 6-0 and set up a second-round match with Venus Williams.

A raft of late-season injuries and retirements have raised the chances of ninth-ranked Ivanovic reaching the year-ender in Singapore but she refused to jinx herself by discussing it publicly.

“To be honest I’m not looking that far ahead. Every time you think about that it kind of backfires,” she said.

“You have to really stay humble and work hard for each match. We see there are so many tough opponents out there … so you really have to keep your head in the right place and play like you practice.”

Ivanovic is currently about 800 points adrift in the race for the eight-player WTA Finals later this month, with 1000 points going to the winner in Beijing.

However, several players including Maria Sharapova are carrying injuries and top-ranked Serena Williams has already withdrawn for the rest of the season seeking extra rest.

Against 112th-ranked Dellacqua, sixth seed Ivanovic made life hard for herself when she was twice broken in the first set although she soon hit back with breaks of her own.

A pep talk from her trainer at 4-3 down proved the turning point and she then swept through the next 10 games to win in just over an hour.

“I think I calmed down a bit and took more time, and I started to do things a little bit better,” she said.

“I thought that I was playing well but I was rushing … but then after I really tried to be patient and make her move, and I started to serve better too.”