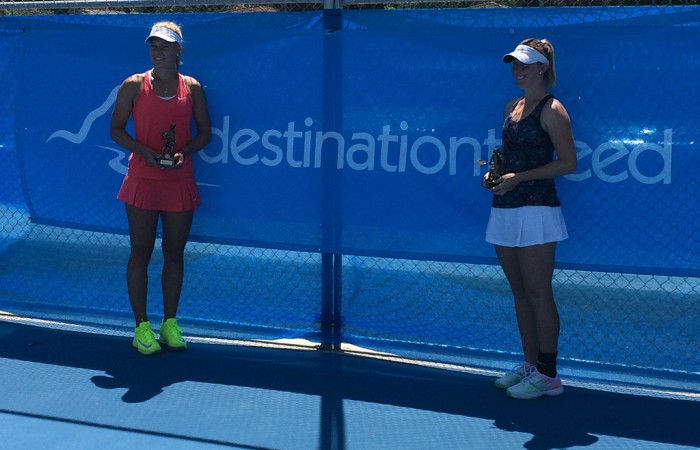 Unseeded Hungarian Dalma Galfi is the inaugural winner of the Tweed Heads Tennis International after upstaging West Australian Storm Sanders 6-2 3-6 6-1 in the final on Sunday.

The 17-year-old was impressive throughout the week and thoroughly deserved the title – her fourth on the ITF Tour.

“It feels really good to be the first person to win this tournament,” Galfi said. “It’s kind of special.”

While the eighth-seeded Sanders remained valiant throughout the match, lifting her intensity to snare the second set, Galfi kept her at bay, looking dominant in the final set as she stretched away to comfortably take the victory in one hour and 41 minutes.

“I was really patient the whole match today,” she said. “I tried to stay focused, which didn’t really work in the second set, but it came back. I think that was the difference. I was more focused.”

Galfi – world No.443 – is scheduled to play the upcoming Pro Tour events in Cairns and Toowoomba and will take a lot of confidence from this past week after posting wins over fifth seed Alison Bai and third seed Katy Dunne on her way to the title.

While unsuccessful at the final hurdle, Sanders will still be buoyed by her own form, particularly her stirring come-from-behind win over fourth seed Pia Konig earlier in the tournament.

Despite being humbled by Galfi in the quarterfinal, Sydney-sider Tammi Patterson – who qualified for this event – also enjoyed a strong run this week that included an opening round victory over top seed Jessica Moore.

Patterson added to her performance by teaming up with Queensland teenager Kimberly Birrell to take the doubles title.

Another pair of Queensland teens, namely Naiktha Bains – who defeated second seed Miyabe Inoue – and Priscilla Hon were also prominent in reaching the quarterfinal stage of the singles event.