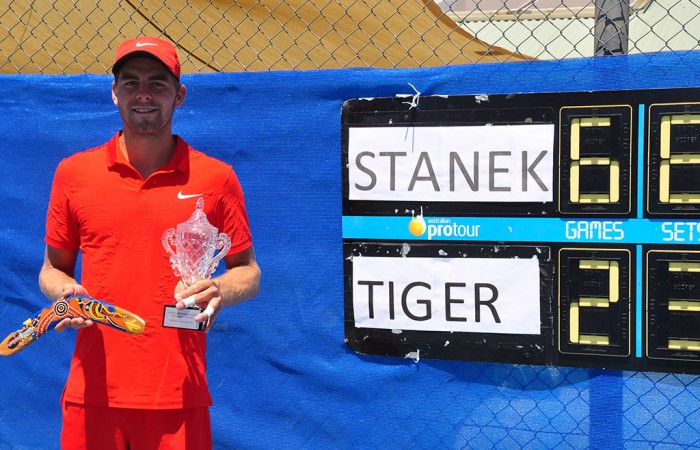 He accounted for China’s Li “Tiger” Zhe – the fourth seed – on Saturday morning 6-2 6-3 in just over an hour to complete an impressive run to his first Futures title that included an opening round victory over Australian top seed Jordan Thompson.

“I am so glad I won the match today because Tiger is a fantastic player and he pushed me to my limits,” Stanek said. “I was playing very good and I’m really happy to get the win.”

Both players began nervously with Stanek breaking at 2-all and settling to take out the first set with relative ease. The second began with three consecutive breaks before the Czech finally consolidated and held on to take the match.

Commenting on his clean sheet in Alice Springs – he did not drop a single set all week – Stanek admitted he might have gotten a bit lucky. “I had some very close ones and I had to fight for every point,” he said.

Relatively unknown on Australian soil, the 20-year-old seemed at home in the hot conditions at Alice Springs, which on some days hovered around the mid-thirties (degrees Celsius).

“I don’t mind the heat that much, but at some stages it was very difficult,” Stanek said.

Boasting a powerful serve and aggressive forehand, the world No.633 will receive a significant rankings boost and as a dangerous floater in upcoming draws looks certain to be a major factor during the rest of the Australian Pro Tour calendar.

While the seeds may have tumbled early this week, Australians Maverick Banes and Dayne Kelly performed admirably, each reaching the semifinal stage.

On Friday, doubles top seeds Jordan Thompson and Alex Bolt attempted to score a win for the Australian contingent, but they were upset by second seeded Chinese pair Li Zhe and Xin Gao, who took out the title 3-6 6-3 [10-1].