Following a gritty three-set victory to move into the semifinals of the Pro Tour event in Tweed Heads, Storm Sanders has kept the Aussie flag flying. 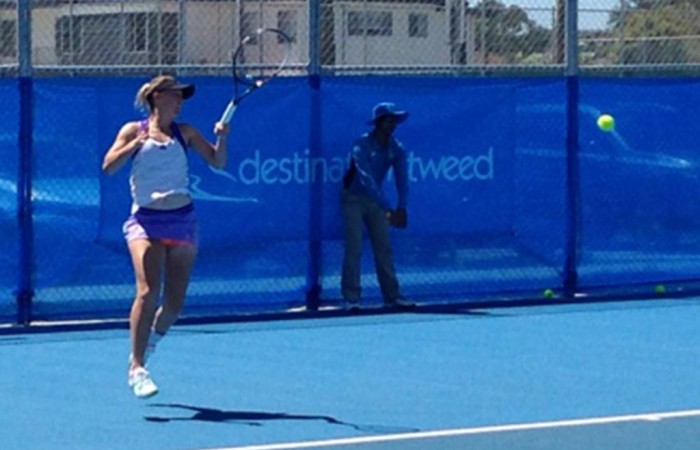 Storm Sanders is the sole Australian to reach the semifinals of the inaugural Tweed Heads Tennis International after clawing her way back from a one-set deficit to defeat fourth-seeded Austrian Pia Konig 4-6 6-4 6-2.

“We both competed really well today,” Sanders said. “Once I got ahead 5-3 in the second I felt like I got some momentum but it was tough all the way until the end.”

After splitting the opening sets, the third began with a string of break point opportunities for the eighth seed from Western Australia, who was finally able to claim the game on her fifth attempt.

From there, she was never troubled, breaking again to take a 5-1 lead before closing out the match in just under two-and-a-half hours.

“It was a good win today,” Sanders said. “It was good to keep the Aussie flag flying here.”

With an Australian representative in each of the quarterfinal matches, there was an air of local optimism around Tweed Heads on Friday morning but that quickly subsided as the international brigade began to flex their collective muscle.

In the opening match, Brit Katy Dunne proved too much for Priscilla Hon, taking out the teenage Queenslander in straight sets.

Hon had opportunities early but failed to capitalise with Dunne simply more solid at key moments. The third seed has been progressing well this week, defeating Lizette Cabrera and Sally Peers in previous rounds.

She now faces Dalma Galfi in the semifinals after the unseeded Hungarian – with wins over qualifier Kaylah McPhee and fifth seed Alison Bai – turned up the heat to bundle out Sydney’s Tammi Patterson without the loss of a game.

Patterson, a qualifier, stunned top seed Jessica Moore in straight sets on the opening day of the tournament.

Marianna Zakarlyuk then became the second unseeded player to make the semifinals after accounting for 17-year-old Queenslander Naiktha Bains, 6-4 6-4, in an entertaining affair.

Bains – who ousted second seed Miyabe Inoue on Thursday – made the Ukrainian work for her victory with some strong hitting, yet missed a break point opportunity to level the second set at 5-5 and finally succumbed.

Zakarlyuk will play Sanders in the other semifinal, with the West Australian in a buoyant mood after overcoming a frustrating run of injuries last year when she had reached a career-best ranking of world No.202.

“I had to go back to square one a bit,” she said. “Working on the basics again and trying to get back into tournaments.

“It’s been really good this year to just be able to compete and play. I’ve been feeling good and been able to back it up week after week without any niggles or anything to worry about.

“I’m getting back out there and doing what I want to do.”

Saturday’s semifinal action begins at 10am.