Maverick Banes has sprung another upset at the Alice Springs Tennis International, ousting No.3 seed Omar Jasika to blow the draw wide open. 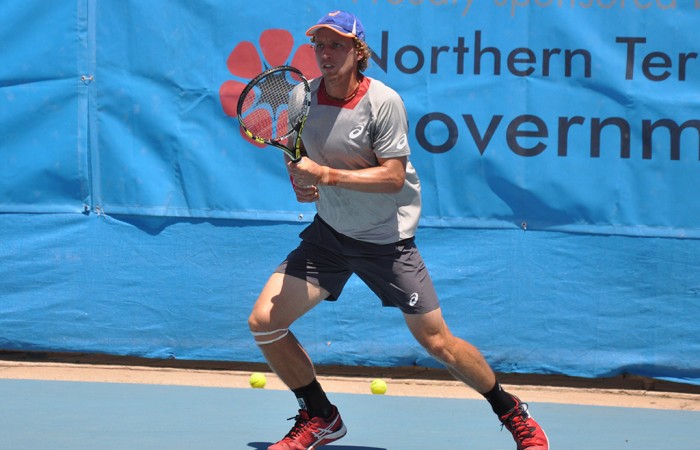 The top seeds continued to tumble at the 2015 Alice Springs Tennis International.

Having lost their previous three encounters without winning a set, 23-year-old Banes was out to make amends, keeping Jasika on the back foot from the outset, a change-up that ultimately paid dividends.

“I tried to play more aggressively today,” Banes said. “Especially on my second serve, but just generally trying to step inside the baseline a bit more and get points on my terms.

Banes was full of praise for the up-and-coming Jasika, who now sits at world No.271 and is poised to have a solid Australian summer.

“His serve has improved and athletically he’s gotten fitter and stronger, “ he said of the 18-year-old. “Physically he’s come along pretty well.”

Banes now meets Robin Stanek – who stunned top seed Thompson in straight sets in the opening round – in a semifinal on Friday.

The 20-year-old Czech has revelled in the conditions at Alice Springs and is yet to concede a set so far this week, on Thursday taking care of eighth-seeded Yusuke Watanuki from Japan to reach the last four.

“He’s another young guy who I haven’t really seen around that much, but he’s obviously playing pretty well,” Banes said.

“I saw a little bit of him play in the first round, but hopefully I can chat with Jordan (Thompson) and pick up on a few things.”

In other quarterfinal action, Victorian Dayne Kelly rallied from a set down to ultimately prove too strong for Bradley Mousley, who accounted for second seed and fellow South Australian Alex Bolt earlier in the week.

Kelly has a tough semifinal ahead of him, facing the highest remaining seed, China’s Li Zhe (No.4), after he defeated Queenslander Gavin Van Peperzeel in three tight sets.