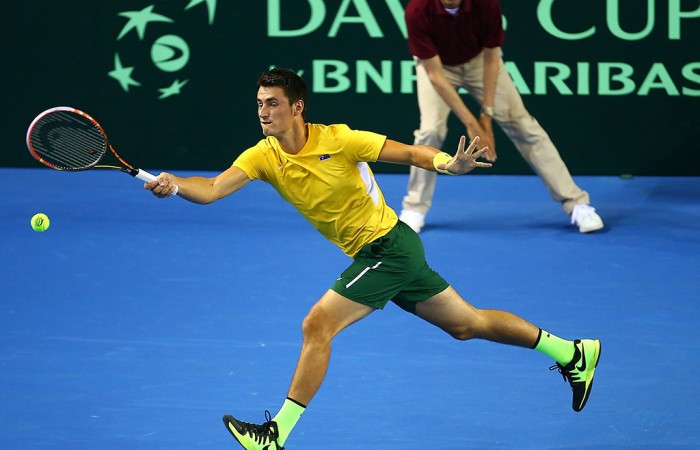 Andy Murray has beaten Bernard Tomic to end Australia’s hopes of reaching the Davis Cup final for the first time in 12 years.

Murray downed Tomic 7-5 6-3 6-2 in Sunday’s first reverse singles rubber to give Great Britain an unassailable 3-1 lead in the best-of-five-match tie in Glasgow.

Improving his imposing singles record in the competition to 24-2, and 30-7 overall, Murray secured all three points for the Brits just as he had in their quarter-final triumph over France in July.

The world No.3’s heroics in front of delirious home fans at the Emirates Arena propelled Great Britain to their first final since 1978.

But while the Brits continue their pursuit of a first Davis Cup title in 79 years against either Belgium or Argentina, Australia’s defeat drew the curtain on Lleyton Hewitt’s legendary career in the century-old competition.

With Murray heavily favoured to continue his decade-long unbeaten record against Australian challengers and Britain’s second singles player ranked 300th in the world, the outcome of the indoor hardcourt tie hinged on the doubles.

A man on a mission, Murray needed one hour 46 minutes to see off Tomic, whose only previous losses in an impressive Davis Cup career had come against Roger Federer on grass in Sydney and Florian Mayer on clay in Hamburg.

Murray gained the first break of the match in the fourth game, his extraordinary defensive skills forcing Tomic into a backhand error after a lung-busting 15-shot rally.

Tomic tried valiantly to stay in the set and conjured two break-back points with the Scot serving for it at 5-3.

His toil paid dividends when Murray coughed up a double-fault and then missed a backhand to allow Tomic back on serve.

Tomic handed Murray in the fourth game of the second set with a loose overhead and backhand error.

There was no let-off this time as Murray steamed to a two-set lead and there was no coming back.

Tomic dropped serve to love fall behind an early break in the third set as Murray moved in for the kill.

The reigning Olympic champion snared a fourth service break for 5-2 and sealed the win – and the tie – in the next game.