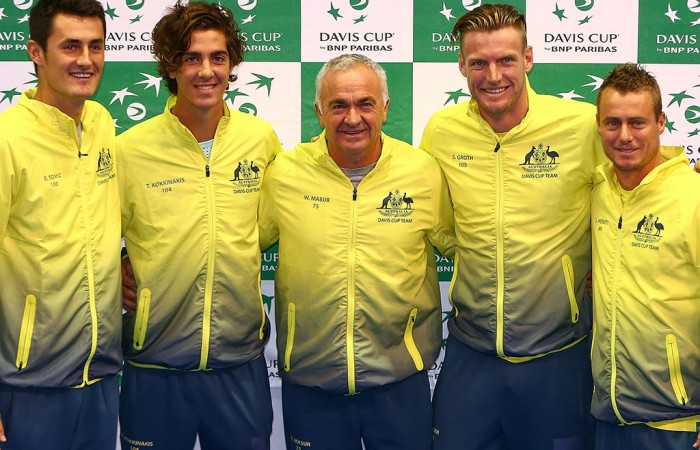 Win or lose against Great Britain, Thanasi Kokkinakis says that he is indebted to Lleyton Hewitt and Sam Groth for giving him another shot at the Davis Cup.

After the Aussies went down 0-2 to Kazakhstan in the quarterfinals, Hewitt and Groth spearheaded the comeback that propelled the team into its first Davis Cup semi-final since 2006.

“They definitely bailed us out. We had a shocker, not going to lie there,” Kokkinakis said after being handed a crack at British No.1 Andy Murray in Friday’s opening singles match in Glasgow.

“Leyton’s been huge for tennis in Australia, always coming back and playing those five-setters.

“So for him to win it in that fifth rubber just speaks volumes about his professionalism, to show he’s always ready.

“He bailed us out and killed the fifth rubber. That was huge for us and we wouldn’t be here without Lleyton and Sam.

“I thank the guys again for picking me.”

Tomic, with an otherwise superb 14-2 Davis Cup record for Australia, is also enjoying being back on the team to face the Brits.

“I’m happy to be on the team. At the time, in June and July, it was a bit of a disappointment,” he said.

For Hewitt, the feeling is mutual.

The veteran warrior is an unabashed admirer of his young proteges and says Kokkinakis’s attitude and commitment is symbolic of the spirit in the new-era Australian team.

“This competition obviously means a lot to me,” he said.

“In my last year playing, it’s a great opportunity. With my experience and the other boys’ youth out there, we’ve really mixed it up out there.

“We’ve had some pretty tough ties and have been able to find a way to get the three rubbers we’ve needed.

Groth makes no secret that the inspirational Hewitt, the country’s longest-serving and most prolific Davis Cup performer, is quietly driving Australia’s title push.

“Obviously we’ve got the goal as a team, but to have Lleyton in the team with the opportunity we have got now in the semi-final in his last year, we are all aware,” Groth said.

“It’s not really something that’s spoken about, but we are all definitely aware of the history that he has playing Davis Cup for Australia.

“For me, what an honour it is to play on the same team as him.”