The rules of Davis Cup substitutions aren't simple, but when played right can turn a tie on its head. 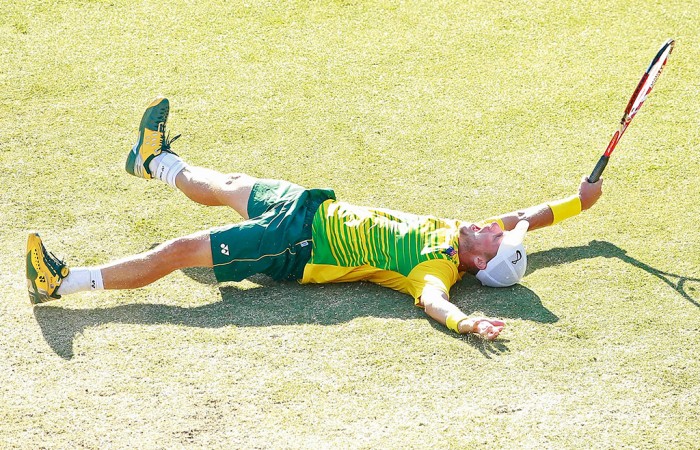 Across any sporting stage it is one of the greatest rivalries – Australia taking on its oldest foe, Great Britain.

When the two nations lock horns in Glasgow this weekend for the chance to reach the Davis Cup final, much of the tie’s outcome will boil down to team captain Wally Masur’s selection tactics for the underdog Australians.

The surest scenario from the outset, barring injury, is Brit Andy Murray – clearly the highest-ranked player between both teams – contesting two singles rubbers.

Unlike the Davis Cup formats of old, Masur will have selection options up his sleeve, with the ability to substitute players from within his team of four.

Masur used the rules to best effect in Australia’s come-from-behind quarterfinal victory over Kazakhstan in Darwin in July.

With the hosts trailing 0-2 after losses for Nick Kyrgios and Thanasi Kokkinakis on the first day’s play, and with Lleyton Hewitt and Sam Groth keeping hopes alive with victory in the doubles on Day 2, Masur opted to pit his doubles players into the two remaining singles clashes. It proved to be a tactical masterstroke, with the pair securing a 3-2 win.

Two-time Australian Davis Cup champion and former No.1 doubles player Todd Woodbridge says in years gone by the two substitutions would not have been allowed under the ITF’s rules. Kyrgios and Kokkinakis, instead, would have had to play the reverse singles rubbers.

“In the old days you couldn’t substitute. Your No.1 played No.2 and then on the last day there was a draw and the twos played first or the ones played off first,” Woodbridge said. “Then the rule changed to where the No.1s now always play the fourth match (on Day 3), and they later introduced the substitution rule.”

Here’s a bit of background on how the Davis Cup ties actually work:

Five rubbers, or matches, are played over three days, with the team that wins three or more progressing. On the opening day, the No.1-ranked player from each team plays the No.2 player from the opposing team with the order of play to be decided by lot. The doubles rubber is played on the second day and for the reverse singles on the third day, the No.1 players from each team play off, with the No.2-ranked players contesting the fourth and potentially deciding singles match.

A lesser-known ITF Davis Cup rule comes into effect when substituting players once the tie has been decided, a rule Woodbridge and his former Davis Cup teammate Pat Rafter object to.

Each nation nominates three to four players in its team from an initial squad of five, plus a captain.

“The captain picks the final four just prior to the draw on the Thursday,” Woodbridge said. And therein lies his objection – having a five-member squad when only four can be selected to play. It means a specialist doubles player may be forced to substitute as a singles rubber or miss being selected altogether.

“I’m an advocate of a five-member team,” Woodbridge said. “It was a scenario Mark Woodforde and I faced a couple of times at the end of my career when I was only playing doubles, and was still No.1 in the world. In terms of the Bryan brothers, the US always takes a risk. That is, if one of their singles players goes down they’re in trouble. Here they have the best doubles team in the world and there’s the chance that they may not be able to play because you may be better off taking three better singles players trying to get those three points. The competition in my mind isn’t at its best because it doesn’t promote having the best team.”

The issue arose most recently for Australia in its 5-0 whitewash of Uzbekistan in a World Group Qualifying Tie in Perth last September.

Two of Rafter’s four designated players were forced to contest the dead rubbers, ie: after the tie had already been decided.

This was also the case in Perth where Hewitt and Kyrgios had won their respective singles rubbers before Hewitt and Guccione claimed the doubles to secure the tie 3-0. Fourth teammate Groth was allowed to play in place of the injured Kyrgios in the first of the dead-rubber reverse singles matches and Rafter lobbied the ITF unsuccessfully to allow Kokkinakis – the fifth player in the squad, but not part of the playing team – to take the place of Hewitt.

“It’s just an irrelevant match,” Rafter said at the time. “I want to put Thanasi in; they won’t let me. I think everyone would really appreciate seeing the young kid play and how good he is, and he’s a potential player for us in the future. I just totally disagree with the ITF ruling; it makes no sense to me at all.”

Masur and the Australian team won’t be concerned with dead-rubber substitutions this weekend. It’s all about which cards Masur will play in the selection process to upset the Brits and extend bragging rights over an old foe.