With her first US Open being in 2004, Casey Dellacqua knows New York better than most. Still in town for the doubles final, she shares her knowledge of the Big Apple. 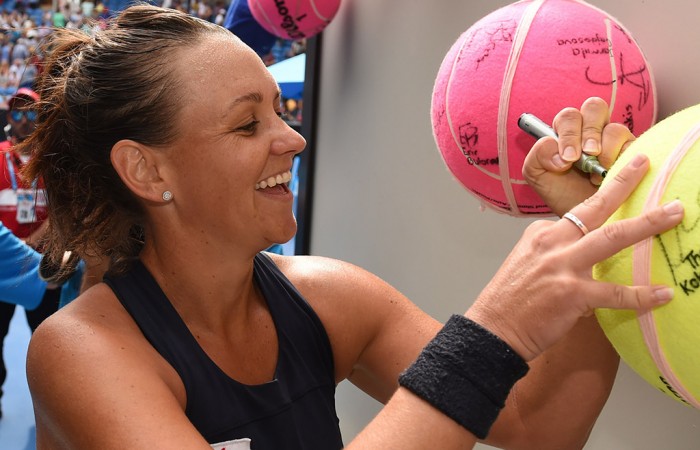 You’ve been to all the Grand Slams – what separates the US Open from the others?

I think because it’s New York City, I don’t know, it’s got something special about it. You just feel really excited. To be honest, I never get sick of coming here, but when the tournament’s over I’m ready to leave. It’s kind of one of those really exhilarating places where you get so much enjoyment and there’s so much happening but for me, a little Perth girl, it gets a bit overwhelming by the end of it. But it’s a really exciting city, there’s always stuff happening, good shopping. I do every year look forward to coming back, I honestly do.

As a smaller-town girl coming to a huge city like New York, what’s your trick for dealing with that?

The hotel we’re staying at is right near Central Park. And the fact that’s across the road is really nice because you’re in such a concrete jungle and there’s buildings and buildings and just to be able to walk across the road and have trees and fresh air and space is wonderful. That’s one type of thing I try and do, is pop over there, even if it’s just sitting on the grass for an hour, that usually rejuvenates me and then you get back to the hustle and bustle of the the city.

What’s the best court for watching a match at the US Open?

I’m gonna go with Court 17, the one we (she and Yaroslava Shvedova) just played our doubles on. I’ve played a couple of matches there now; it’s just got a really intimate, exciting feel to it. And then also Grandstand I think probably, it’s great. Arthur Ashe is just too big (laughter) … I think the good thing about the US Open, and I’ve had friends that have come and watched, is the fact that you can actually get a seat on most courts. Wimbledon, the French, even sometimes the Aussie, you’re lining up for hours to try and get in to see a match. But here it seems you can kind of generally walk onto a court and get a seat. I mean obviously there are some matches that are choccas but you can really enjoy the whole US Open experience for sure.

You probably take a courtesy car most often now, but are there other good ways to get around New York and to the US Open?

I have done the subway; when I was playing quallies and that, transport wasn’t as readily available. They had shuttle buses and stuff, but I actually did the subway and it’s probably quicker than driving sometimes, just traffic wise sometimes even getting out of Manhattan can be a real nightmare. So getting on the subway if you’re a fan is definitely the best way to go.

What’s the best place to stay? It sounds like it’s possibly the hotel you’re in now!

I’ve stayed in quite a few different ones, but for me the last couple of years I’ve stayed at this JW Marriott and like I said, for me it’s a win.

Between matches, or if you had some time in New York after the tournament, how would you spend a day?

Definitely shopping. Even at 8.30 last night I was a bit bored, and I thought I’d walk down to Times Square and happened to pop into the Disney store again. Yeah, shopping, definitely. Our dollar’s not great at the moment but yeah, the shopping in America, you just can’t beat it. They’ve got a different range, different stuff and generally pretty good prices as well.

Have you got a favourite place to go shopping?

I pretty much just go to lots of different sections of town. Soho, Times Square. I Google shops I know I want to go to and they’re kind of scattered around Manhattan so I generally just wander, walk and find a lot of the shops I need to go to.

If you finish a late match, and you want to maybe go out, get some food, or wind down somewhere, is there a good place to go?

I generally go to Chipotle (laughter). Chipotle’s a big winner for me. Only because it’s quick, easy, fresh and healthy. But I do love getting a nice steak when I’m in America. I often go to a place called Porterhouse which has really nice steak. It’s quite expensive but if I feel like lashing out for a night and having a glass of wine, I’ll go there. But I’m not really a bar-hopper type of girl. So I haven’t really done much of that in New York City. I’m pretty low key in that sense.

Are there any other restaurants you’d recommend?

Yes, but I actually have no idea what they’re called (laughter). We went to a really nice Italian place last year down in Greenwich Village, that’s always a really nice area. And the Meatpacking District has really good food.

Top three must-dos? Shopping is obviously in there …

Shopping, yes. Definitely the Empire State Building. Doesn’t matter if you go day or night. It’s one of those things you kind of have to tick off and get a few photos up the top. You get pretty good views over all of Manahattan. And I’d probably say the 9/11 memorial. That’s really moving; it just puts things in perspective, and you learn little things. Like obviously every person that passed is named there and on each birthday they put flowers next to the name of the person. Little things like that. And definitely see a show. I haven’t seen one this year but I’ve seen plenty before. I’ve done Chigaco, Jersey Boys, Lion King. I pretty much do one most years.

How has the city changed in the time you’ve been coming to New York?

Just the busy-ness. It’s always busy, and it always has been busy, but … just traffic and population have increased over the years. I think it feels safer. Definitely there were times I probably wouldn’t walk around too much at night, but last night I was up and walking around and you feel pretty safe.