De Minaur into US Open semis

Alex De Minaur's magical US Open has continued, with the Aussie qualifier upsetting No.2 seed Michael Mmoh to reach the boys' singles semifinals. 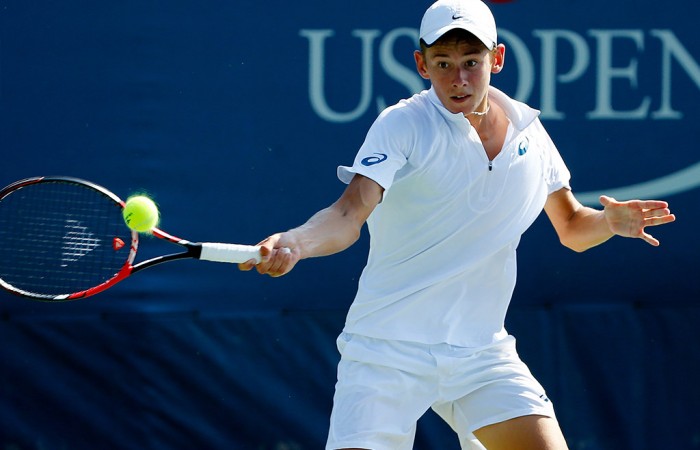 Alex De Minaur has continued on his merry way at the US Open, advancing to the boys’ singles semifinals with an upset win over second seed Michael Mmoh.

De Minaur was blown away in the early stages of the match by his bigger, older and stronger opponent, before recovering to win 1-6 6-3 6-4.

“But then I adapted, stayed a little bit lower, was just readier in the second set. I started playing my game again and it ended up doing well for me.”

Having come through qualifying, the Australian has now won six matches in a row, the last two over seeded opposition from the United States.

He’ll get a crack at another American seed – No.5 seed Tommy Paul – in the semifinals.

Paul, the junior boys’ champion at Roland Garros, just last week qualified for the main draw of the men’s singles at Flushing Meadows.

“It’s amazing. I think my game’s really clicking. I’m playing some of the best tennis I’ve played in a long time and I think coming through qualifying helped me because I built up momentum,” De Minaur said.

“In the quallies I just started playing my own game and after that I took that into the main draw. I’m playing happy and enjoying it.”

Despite being based in Spain, De Minaur retains strong connections to his homeland, which have persisted in New York.

The 16-year-old is being assisted by both Australian Davis Cup captain Wally Masur and Fed Cup captain Alicia Molik.

He says their advice – especially that of Masur, with whom he used to work at the National Academy in Sydney – had been valuable this week in New York.

“Almost every day we’ve had a chat. He’s obviously looking out for me. He talks with me about my matches,” he said.

“(He provides me with a) positive mindset towards the match. (Advice like) believe in myself and play my game.”

He’ll be spending more time with Masur in the coming weeks; De Minaur will travel to Glasgow for the Australian men’s Davis Cup team’s semifinal against Great Britain.

Then, along with his junior teammates – who are also attending the Glasgow tie – he will head to Madrid for the Junior Davis Cup final.

But first, he has his US Open campaign to focus on.

Despite having played a lot of tennis, De Minaur said he felt fresh and ready to tackle the challenges ahead.

“I’m feeling really well at the moment. I feel like I’m quick on the court, not really feeling that fatigued yet, so that’s a positive,” he said.

“I never would have thought at the start of the week this would be happening. I’m really happy that I’ve done this playing my game as well; that’s really important to me, not to get sucked into playing other people’s games.

“I can’t wait for the next thing to happen. Just living day to day, and it’s been great at the moment.”