After failing to serve out the match and then facing almost certain defeat in the final-set tiebreak, John Peers and Jamie Murray held firm to reach the US Open doubles final. 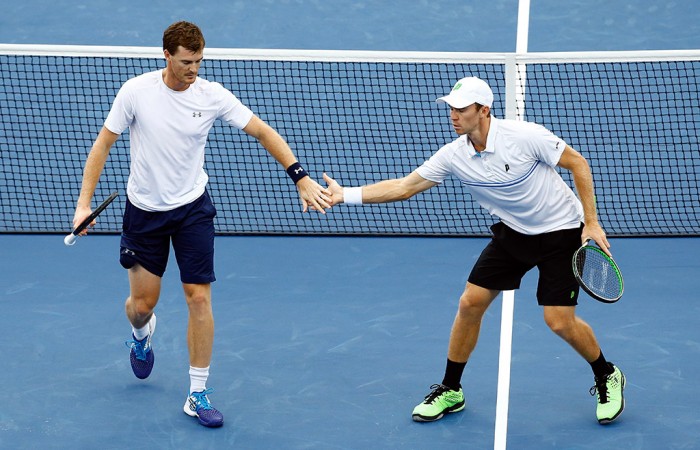 John Peers and Jamie Murray have survived a match point to advance to the final of the US Open in a thrilling men’s doubles semifinal.

Peers and Murray, the No.8 seeds, held off unseeded American duo Steve Johnson and Sam Querrey 6-4 6-7(2) 7-6(7) to reach their second straight major final, after doing so at Wimbledon in July.

Serving for the match in the third set leading 5-3, Peers played a forgettable game, dishing up two double faults to drop serve and keep Johnson and Querrey alive.

“I pretty much tried to put it out of my mind or otherwise I’d be sitting on a plane back home in a couple of hours,” Peers reflected with a laugh.

When the final set progressed to a tiebreak, the Americans looked destined for victory when they pushed ahead 5-2.

Yet Peers and Murray’s superior doubles nous shone through.

Facing a match point trailing 6-5, Murray found the doubles alley with a reflexed volley winner. He and Peers eventually forced enough errors from Johnson and Querrey with their rock-solid form at net to escape to victory.

“My nerves are shot,” Murray said.

“We’re so happy to win and get to the final. I think we played a high level match. (Johnson and Querrey) came back strong … we somehow managed to turn it around at the end, and we’re pumped to be in the final.”

There they will meet Frenchmen Pierre-Hugues Herbert and Nicolas Mahut, after the 12th seeds dismissed Dominic Inglot and Robert Lindstedt in straight sets earlier on Thursday.

Having also overcome fourth seeds Marcin Matkowski and Nenad Zimonjic in a titanic three-setter in the quarterfinals, Peers and Murray arrive in the title match full of belief.