US Open: Peers, Murray into semifinals

John Peers and Jamie Murray stand just one win from their second straight Grand Slam final after coming out on top of a thrilling doubles quarterfinal on Tuesday. 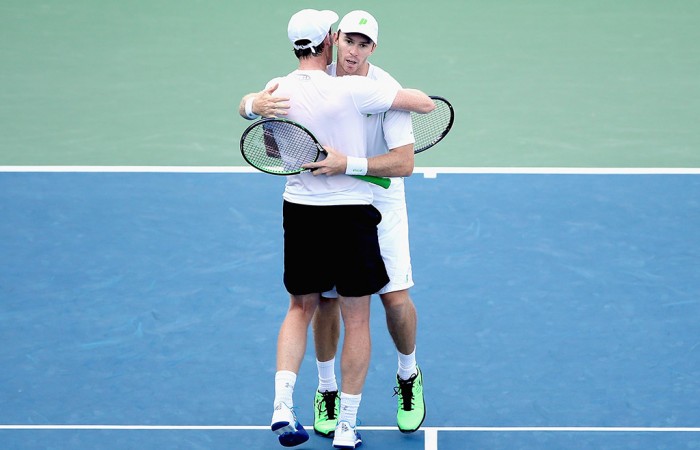 John Peers and Jamie Murray have continued their impressive Grand Slam form to reach the semifinals of the US Open.

The Australian-Scottish duo ousted No.4 seeds Marcin Matkowski and Nenad Zimonjic 3-6 6-3 7-6(4) on Grandstand on Tuesday.

After making the Wimbledon final in July, the pair will have the chance to repeat the feat at a second straight major tournament when they face an unseeded pair – either Americans Sam Querrey and Steve Johnson, or Argentine-Portuguese combo Leonardo Mayer and Joao Sousa – in the last four.

“If you’re not excited, you’re not enjoying the game,” Peers said of his team’s thrilled celebration.

Added Murray: “We want to keep trying to win. We’re in the semifinals now – why not get to the final?

“We got to the final of Wimbledon … I guess you kind of get that hunger to do that again.”

Early on in their quarterfinal against Matkowski and Zimonjic, such a possibility looked unlikely.

The fourth seeds started the sharper of the two teams, breaking Murray’s serve in the eighth game after wearing down the Aussie and the Scot at net.

Yet despite soon falling behind a set, Peers and Murray rallied.

With a flurry of winners in the fourth game of the second, they broke Zimonjic and built a 4-1 lead. They retained their advantage and sent the match into a decider.

The teams couldn’t be separated in a tense final stanza, but when the tiebreak rolled around, Peers and Murray were rock solid.

They benefitted from five errors from the fourth seeds, and then earned a swag of match points leading 6-2 when Murray put away a lunging forehand volley.

Peers sealed the victory with a powerful smash that Matkowski couldn’t return.

“In the tiebreak we managed to hustle a few points, just obviously what you need to do, and we’re happy to be in the semis,” Murray said.

“We took a lot of good things away from (reaching the Wimbledon final) and we won the next week we played in Hamburg as well, and now we’re in the semis here.

“So I think things are going good for us. We seem to be gelling well together, we know what each other’s doing on the court, and we’re getting our rewards.”