Sam Stosur's woes against Flavia Pennetta have continued, with the Italian ousting Stosur in straight sets to advance to the US Open quarterfinals. 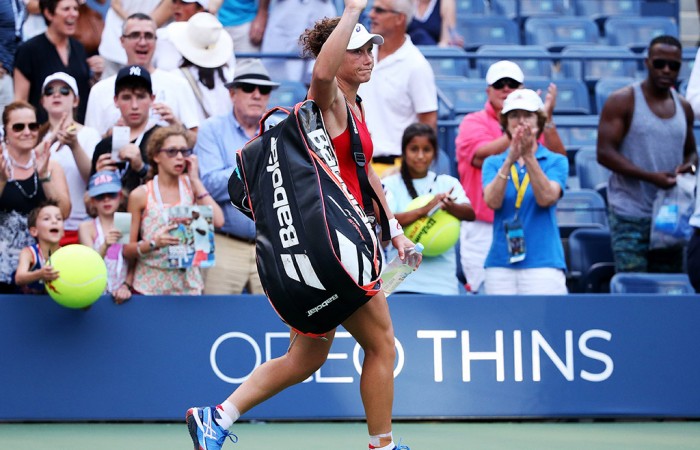 Update 8.30am: Flavia Pennetta has taken her winning record over Sam Stosur to a perfect 7-0 after beating the Australian in the US Open fourth round.

In the last match of Monday’s schedule on Arthur Ashe Stadium, Pennetta was stronger in most departments, winning 6-4 6-4.

She goes on to a quarterfinal match-up against either two-time Wimbledon champ Petra Kvitova or breakout Brit Johanna Konta.

“I think Flavia played a very, very good match. I was actually quite pleased with the way I played. I feel like there was a couple opportunities I had maybe to break her. She came up with the goods,” Stosur assessed.

“The second game of the match was my best chance. I wasn’t able to capitalise on that. The next time I had break points she came up with really good shots off my returns. Can’t do anything about that.

“I don’t feel like there was too much in the match. I thought overall I played well. Just needed to be a little bit better with the standard she was playing.”

After surviving those break points in the second game, the Italian established the ascendency early, breaking Stosur’s serve in the fifth game en route to a 4-2 lead. Her backhand – especially down the line – was particularly devastating.

Stosur battled, and in the ninth game led 0-30 before gaining two break points as Pennetta attempted to serve out the set.

She couldn’t convert. Pennetta played incredibly solid tennis under pressure and forced the Australian to go for too much.

Stosur netted a backhand, and Pennetta pocketed the first set.

The stat sheet wasn’t pretty; the Australian had almost twice the unforced errors of her opponent, yet less winners.

The second set was a better story, and games went on serve longer, yet Pennetta was the one holding with more ease.

The break came in the seventh game, allowing the 26th seed to nudge ahead 4-3.

From 0-30 in the ninth game, Stosur produced some of her best tennis of the match off her serve and forehand to force Pennetta to serve for a place in the quarterfinals.

The Italian showed no sign of nerves, quickly moving ahead 40-0 and closing out victory in style with a running forehand passing shot winner.

“The spin that I use and the weapons that I like to do against pretty much every single player doesn’t seem to bother her,” Stosur said.

“She can let the spin come out of the ball. Almost looks like she’s got lots of time to hit what she wants to hit. She serves very well against me.

“My big weapons don’t seem to be weapons against her, so that makes life pretty tough.

“(Yet) I felt going into this match I was playing well enough to win the match. I believed I could win.

“I think that’s a really important thing that when you are playing against someone who has had the better of you every time. You have to believe that, otherwise you might as well not even walk out there.”