Stosur through to second week in New York

Sam Stosur has turned the tables on Sara Errani, playing with confidence and aggression to close out a three-set victory and advance to the US Open fourth round. 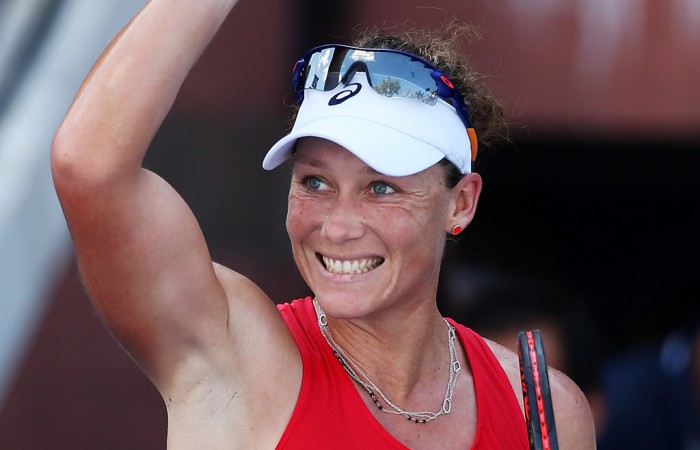 Update 6.55am: Sam Stosur has polished off Sara Errani to advance to the fourth round of the US Open.

Overcoming the loss of the second set, Stosur stayed true to her aggressive game and was rewarded, closing out a 7-5 2-6 6-1 victory.

The win was especially sweet given she had lost her last two matches to the Italian.

“(I) kind of lost my way early in that second set, and she kind of got control of the match again,” Stosur said.

“For the changeover for the third I just kind of sat there and told myself to calm down and, yeah, really talk about what was going on and focus on my service games.

“I was able to come out and play really well start of the third, and that obviously led to playing well again.”

She advances to a final 16 meeting with another Italian in Flavia Pennetta, the No.26 seed against whom she trails the head-to-head 0-6.

“I really need to knuckle down (against Pennetta) and be clear with what I want to do and what tactics are going to work for me and how I can continually make that happen,” Stosur said.

“I know that playing against her I find it very difficult. She can take some of my weapons away, which is why I find it hard.

“I’m going to have to be really switched on.”

Yet the 16th seed is a persistent opponent, and refused to cede an unforced error; she allowed Stosur to implode and won three straight games to nose ahead.

The Australian resettled, and with the Grandstand crowd firmly in her corner, she saved two break points in the eighth game with powerful hitting to level at 4-4.

That recovery appeared to be a major confidence boost – with the winners again flowing off her racquet, Stosur took three of the next four games to clinch the opening set.

A lapse at the start of the second set – she surrendered her serve twice – saw Stosur fall in a 3-0 hole.

She worked hard to get back into the set, yet after snaring one break back, she missed a break point opportunity in the sixth game and the frustration crept in.

She would not win another game for the set.

Stosur rebounded impressively at the beginning of the third, hitting out aggressively and landing several powerful serves and forehands to build a 3-0 lead.

Errani, who had struggled with a virus in her second-round victory, appeared to be tiring, and Stosur capitalised on some rare loose errors.

The Aussie piled on the pressure in the sixth game, crunching a forehand return winner, an overhead winner and a forcing shot to draw an error, and broke for a 5-1 lead.

She served out the match after one hour and 51 minutes on court.

“I’m happy to be in the second week. Happy with the way I’m playing,” Stosur said.

“There is always things you want to improve and get better at, but you can only do what you do on any given day.”