Stosur storms into third round

With her serve firing, Sam Stosur blasted Evgeniya Rodina off the court in just 51 minutes to move through to the US Open third round. 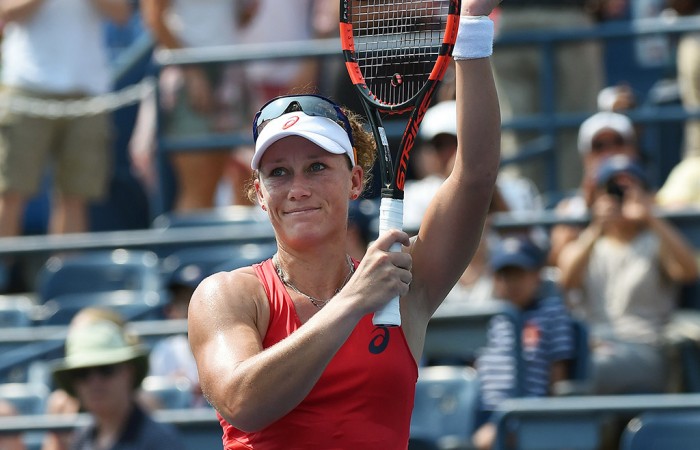 Update 3.55am: Sam Stosur produced a clinical performance on Thursday to march into the third round of the US Open.

The Australian blasted Russia’s Evgeniya Rodina off the court in just 51 minutes in the first match of the day on Louis Armstrong Stadium.

In the last 32 she will meet 16th seed Sara Errani, who has won the pair’s last two matches.

“I’m very happy with the way I played. I thought I played great from start to finish. Nice to get on and off very quickly, especially when it’s hot and I’ve got doubles later today,” Stosur said.

“My first two matches have been really good.”

Stosur’s serve was the critical factor against Rodina; it was simply masterful.

She belted eight aces, won almost 90 per cent of her first serve points, and never allowed the Russian to get a proper read or hit on the ball. Her serve reached speeds of nearly 190km/h.

It allowed her to dominate her service games and freed her up to attack the vulnerable Rodina on the return; the Russian didn’t help her own cause in dishing up five double faults throughout the match.

“I was a bit surprised to see my percentages was only 48. I thought it was better than that. I guess I was winning a lot when I got it in. I mean, once I felt pretty comfortable I tried to keep going for it and play that kind of aggressive tennis,” she reflected.

“Overall I thought I served very well, and the rest of my game backed it up.”

A break in the second game followed by two consecutive aces in the third game saw Stosur quickly build a 3-0 lead.

Rodina showed signs of settling from that point on, cutting down her errors as Stosur endured a mini-lapse. She got on the board in the fifth game.

Yet it was a temporary blip for the 22nd seed; after a struggle at deuce she struck an angled backhand return winner to move ahead 5-1 and served another pair of aces to pocket the opening set with a hold at love.

Stosur is a popular figure in New York and the crowd showed their love for the 2011 champion, frequently calling out their support in the rapidly-filling stadium.

She didn’t disappoint them, immediately getting to work in the second set dissecting Rodina’s game.

In the opening game, Rodina sprayed errors and a double fault to fall behind 0-40 before Stosur cemented the break with a forehand winner.

Rodina was uncomfortable with Stosur’s mix of spins, trajectories, angles and pace, and the errors flowed. Another double fault saw her drop to 0-3.

In a commanding position, Stosur never let up, blasting her serve for a comfortable hold and pushing ahead 5-1.

She bookended the final game with winners to seal her place in the third round, finishing the match with an exceptional 29 winners to seven.