Aussie in action: US Open Day 4

Lleyton Hewitt and Bernard Tomic will face off in an all-Australian battle on Thursday at Flushing Meadows after Sam Stosur kicks off the day on Louis Armstrong Stadium. 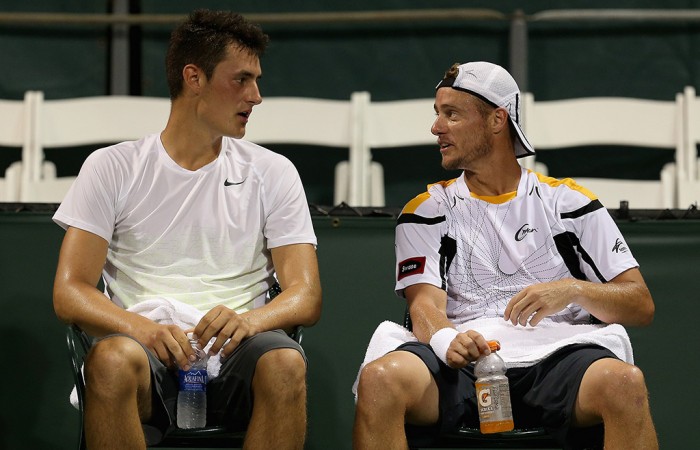 Lleyton Hewitt and Bernard Tomic will face off in an all-Australian battle on Grandstand at the US Open on Thursday.

The other Australian in action is No.22 seed Sam Stosur, who takes on Russian Evgeniya Rodina in the first match of the day on Louis Armstrong Stadium.

The duel between champion veteran (Hewitt) and talented youngster (Tomic) is the first of its kind – despite being long-time practice partners and tour mates, Hewitt and Tomic have never before met in a professional match.

“That’s the only thing to summarise that. I get along great with Bernie. Helped him out a lot. Hit with him this week. Yeah, just awkward.

“Bernie and I have got a really good relationship. He trusts me a lot.

“For me, in the position that I’m in now, trying to help these guys especially with Davis Cup and the rest of it, yeah, it’s tough.”

Despite surrendering a wealth of experience and titles to the 2001 US Open champion Hewitt, Tomic comes into the match in better form.

Hewitt, a wildcard, has won just four singles matches in 2015, while Tomic is the 24th seed enjoying a career-best season on tour.

“It is not going to be easy for me. I look up to him a lot. He is a legend to me, to a lot of people around the world and it is a shame that maybe, in the next month or so, he might stop,” Tomic said.

“It was almost a sign for us to never play, that is how I saw it, with the draws and stuff, but we have to play once. Win or lose, we have to have fun, go for it. He has nothing to lose. He is going to be going for it, so for me, it is going to be more tough.

“I just have to go out there and use the moment and have fun. I am sure he will do the same.”