Just two weeks after falling to Timea Babos in Cincinnati, Sam Stosur has turned the tables in resounding fashion with a commanding victory in New York. 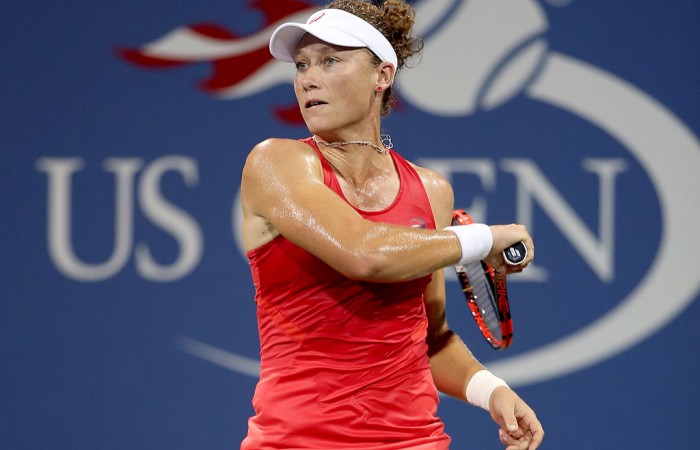 Sam Stosur has avenged her recent defeat to Timea Babos with a commanding victory over the Hungarian in the first round of the US Open.

Stosur powered to a 6-3 6-4 victory on Court 17 at Flushing Meadows, belting 25 winners to eight.

The last of those – a heavy forehand down the line – sealed victory in one hour and 10 minutes.

Just a fortnight ago, the Australian fell in three sets to Babos in the opening round of the Western & Southern Open in Cincinnati, contributing to a three-match losing streak and robbing her of match play leading into the year’s final Slam.

But she was much sharper in New York, and controlled the match from start to finish.

“I came out and played a really good match tonight. I’m really, really pleased with my start here, so couldn’t be happier,” she said.

“Obviously given that we just played a couple of weeks ago and she got the better of me it’s nice to be able to turn it around so quickly.

Stosur had said before the tournament that a first-round match at a Grand Slam was always tough to navigate.

She said getting over the first hurdle was key to gaining momentum as the event progressed.

The victory over Babos proved the perfect start to her 12th US Open campaign.

“I felt great. I guess you’re always a little bit on edge (in the first round), but right from the first game I felt really in control and thought I played the start of the match really well,” Stosur assessed.

“I don’t think she’s won a match here at the US Open, so I had that in the back of my mind that whatever I may have been feeling she was going to feel it worse.

“Going into a second round match it’s always nice having played your first round well.”

There she’ll face Evgeniya Rodina of Russia, a player she admitted to knowing little about.

With coach Dave Taylor on scouting duties, the world No.22 said she could concentrate on her preparation.

“Tomorrow I can come out and practice and then do it all over again in the second round,” she said.