Sam Groth has enjoyed another Grand Slam victory in 2015 after Alexandr Dolgopolov retired from their evening match at the US Open. 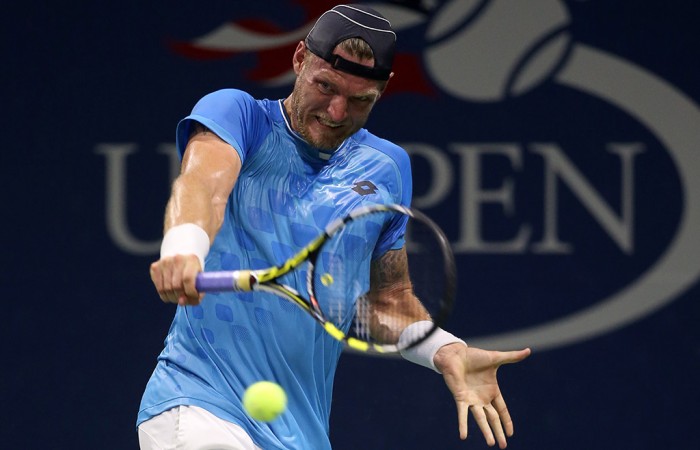 Sam Groth has advanced to the second round of the US Open after Alexandr Dolgopolov retired from their Monday evening match.

Groth had just sealed the third set when the Ukrainian approached the net and shook hands, appearing to be hampered by an elbow injury.

“He said it was his elbow. I didn’t know he had anything going out there. There were times he played well and times he didn’t. I don’t know much it affected him,” Groth said.

The final score of 4-6 6-1 7-5 ret. sends the Australian into a second-round battle with 26th seed Tommy Robredo.

“I actually played (Robredo) in Shenzhen last year. I actually played quite well for a set and a bit. I was up a set. Had a bunch of break points in the second and couldn’t convert,” Groth said.

“Tommy’s one of the most professional guys on tour, he’s been around a long time and he’s a great competitor. I’ll speak to (coach) Ben (Mathias), I’ll come up with a game plan.

“He’s played a lot of matches in this tournament and had a lot of great wins, so I’m going to have to play well to beat him.”

Groth trailed 3-5 in the third set against Dolgopolov and saved a bundle of set points before storming back.

He reeled off three straight games and then confidently served out the set before the match abruptly ended.

“Obviously Alexander is so dangerous and I knew he was struggling a bit … He’s been a lot higher (ranked) than he is right now because he can play tennis like that. I knew I had to stay within it and I was hoping to get a chance to break back,” Groth said.

“I knew if he won that set he definitely wasn’t going to pull out … (but) I sort of knew if I got that set he was definitely a chance of pulling out. I could see him shaking his arm.”

Having broken through at Grand Slam level in New York 12 months ago with his first main draw victory, Groth said the US Open had been a springboard to bigger things this year.

“Definitely last year it started here … Now this year I’ve won matches at every Slam except the French, where I lost to a good claycourter in (Pablo) Cuevas,” he said.

“This year has been a huge step forward for me, especially at Grand Slam level. It’s huge.”