Thanasi Kokkinakis was pushed to the brink by the in-form Alexandr Dolgopolov before sealing his place in the second round of the ATP Winston-Salem Open. 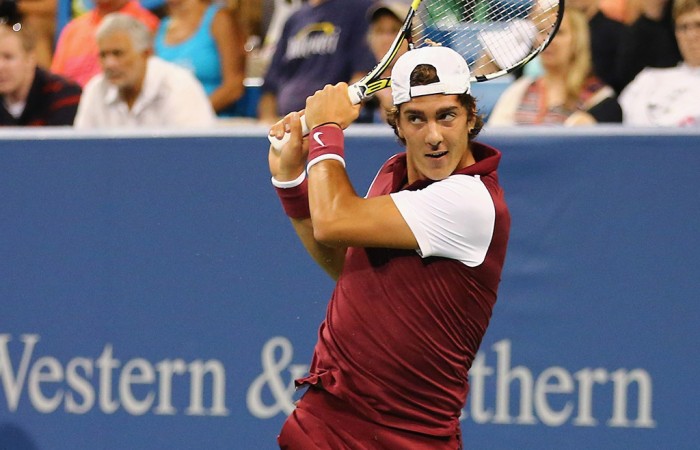 Thanasi Kokknakis has moved through to the second round of the ATP Winston-Salem Open with an impressive win over Ukrainian Alexandr Dolgopolov.

Kokkinakis recorded a 7-6(1) 7-6(5) victory in one hour and 43 minutes to set up a second-round meeting with 15th seed Teymuraz Gabashvili of Russia.

He will take to the court on Tuesday for that match while fellow Australian Sam Groth will also be in action, taking on Steve Johnson.

Last week, Dolgopolov reached the semifinals of the Cincinnati Masters and was mere points away from defeating world No.1 Novak Djokovic for a place in the final.

His match against Kokkinakis was suspended early in the first set due to a lengthy rain delay, and when play resumed, Kokkinakis proved superior in a dominant tiebreak performance.

The Aussie broke open the match with a service break in the second set and served for the match leading 5-3, only for Dolgopolov to come storming back.

Kokkinakis saw one match point come and go in the subsequent tiebreak but eventually sealed victory.

In a stellar serving performance, the 19-year-old produced 11 aces and surrendered just four points on serve throughout the entire second set.

“He was feeling the ball well, hitting it really hard and putting me on my toes,” said Kokkinakis.

“I just tried to stick with him. Luckily, my serve helped me a lot at the end. I was able to play the big points when it mattered.”

The serve was also the feature of a later match between another Aussie, James Duckworth, and American qualifier Frances Tiafoe.

Yet despite Duckworth smacking a jaw-dropping 30 aces, it was not enough to stop the highly-touted teenager.