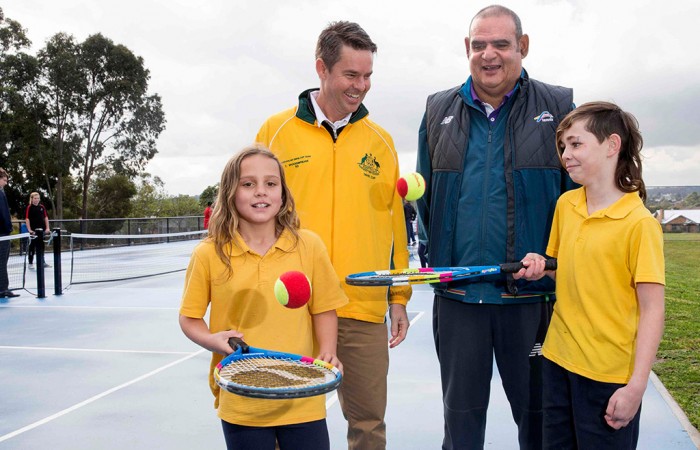 The four new courts will provide improved opportunities for students to get involved in tennis and to learn about nutrition, the environment and Indigenous culture.

In January this year Tennis Australia announced a grant of $61,560 via its Tennis Cares initiative for construction of the new facilities. Reservoir East Primary School was selected for its cultural diversity and vision for tennis to foster tolerance and harmony within the community.

The four ANZ Tennis Hot Shots courts were named in honour of Tennis Australia Indigenous Coach and Ambassador Ian Goolagong in recognition of his ongoing commitment to Indigenous youth. The new garden was named after Aunty Dedrie Baksh for her tireless dedication to Indigenous education.

“This is a great opportunity to showcase an important community project and to demonstrate how the sport of tennis can have a positive impact in the community,” Woodbridge said.

“These four courts are the first dedicated ANZ Tennis Hots Shots courts in the Melbourne area, and we couldn’t have chosen a better location.

“The school community has really embraced tennis and it’s great for the students to have an opportunity to develop not only their tennis skills, but essential life skills including teamwork and resilience.”

Woodbridge was joined by students, teachers and parents for the official opening of the new courts and garden, which are proving a popular addition to the school.

Tennis Cares is an initiative of Tennis Australia and the Australian Tennis Foundation to advocate healthy people, successful youth, strong communities and a sustainable environment.