Hewitt takes Kyrgios under his wing

Lleyton Hewitt has taken on the role of mentoring Nick Kyrgios in the lead-up to the US Open, a move that has scored the tick of approval from tennis pundits. 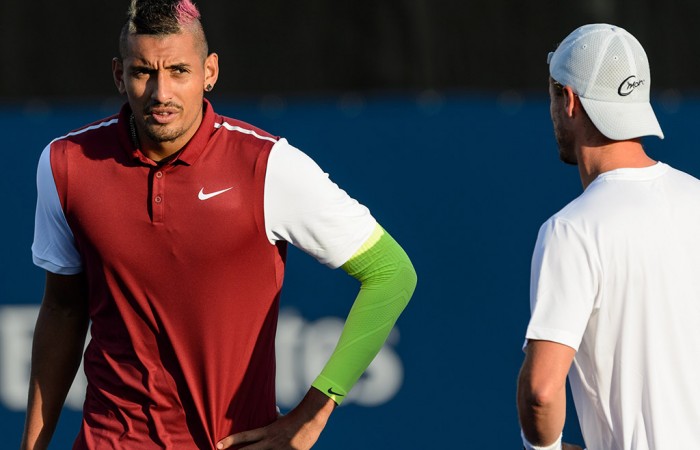 The 34-year-old elder statesman of the current Aussie game was happy to help out the 20-year-old youngster, who began his Montreal campaign with a win over Fernando Verdasco.

Kyrgios said the arrangement remains flexible and fluid, with Hewitt also attending to his own business on court as he goes into the final months of a career due to end early in 2016 after playing in his last Australian Open.

“He’s not my coach. Let’s clear that up now,” said Kyrgios.

“He’s more of a mentor. Lleyton is very kind to take time away from his family and his career to help me and Thanassi (Kokkinakis). We don’t know how long it will last but it is a great help.”

Meawhile, Davis Cup tennis captain Wally Masur believes Hewitt is an ideal choice to mentor Kyrgios, an arrangement which is expected to extend through to the US Open.

Masur feels with Hewitt’s experience the new partnership will help get Kyrgios back on track.

“With Nick, one of the rising stars of the tour, it’s a great opportunity for (Hewitt) to mentor and pass on some of his experience and knowledge.”

The pair also played doubles this week in Montreal, falling in the first round to Frenchmen Jo-Wilfried Tsonga and Gael Monfils.

Kyrgios parted ways with coach Todd Larkham in the lead-up to Wimbledon and has yet to decide on a permanent replacement.

But Kyrgios’s mother Nill told the Canberra Times her son looked up to Hewitt.

“He will listen to Lleyton because he knows what he’s talking about, he’s been at the top and been world No.1,” said Nill Kyrgios.

“Lleyton’s been through everything that Nick is going through.”

Nill said her son “wasn’t in a good head space” after the recent Davis Cup tie against Kazakhstan in Darwin.

He lost his opening singles match and did not play again as Australia recovered from a 0-2 deficit to win.

Masur felt Hewitt would also benefit having the young gun in his corner ahead of the Davis Cup semifinal against Great Britain later in September.

“It’s the perfect preparation for both of them leading into the US Open and Davis Cup semifinals,” Masur said.