Bernard Tomic and Nick Kyrgios will fly the flag this week in Montreal while Sam Stosur and Daria Gavrilova will face off in an all-Aussie clash in Toronto. 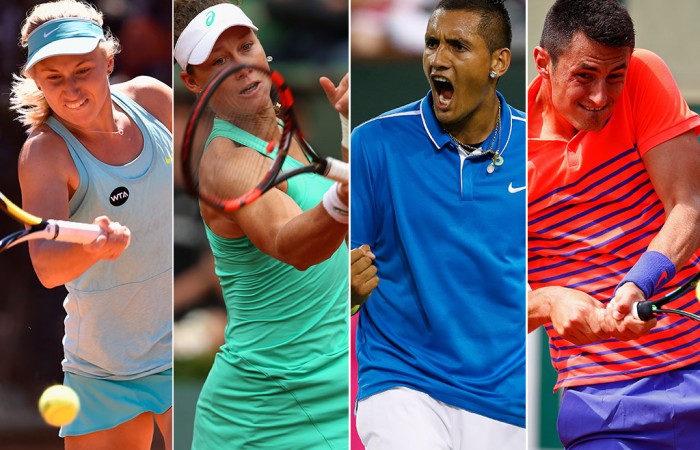 Australia’s men and women will converge on Canada’s two biggest cities as the ATP and WTA tours continue their swing through North America in the lead-up to the US Open.

This week the men will contest the ATP Montreal Masters, with Bernard Tomic and Nick Kyrgios representing Australia in the 56-player draw.

Kyrgios has landed in the top half and takes on Fernando Verdasco in the first round, with the winner advancing to a second-round showdown with No.3 seed Stan Wawrinka.

Tomic is in the bottom half up against Portugal’s Joao Sousa; awaiting the winner in round two is sixth seed and reigning US Open champion Marin Cilic.

Novak Djokovic and Andy Murray are the tournament’s No.1 and No.2 seeds respectively.

Across in Toronto, Aussies Sam Stosur and Daria Gavrilova have drawn each other in the first round of the WTA Rogers Cup.

The winner will meet seventh-seeded Czech Lucie Safarova, who receives a first-round bye.

Serena Williams is the tournament’s top seed, while defending champion Agnieszka Radwanska is seeded No.6.

Four Aussies – James Duckworth, Casey Dellacqua, Jarmila Gajdosova and Ajla Tomljanovic – reached the final round of qualifying yet were stopped at the last hurdle.

Duckworth fell to the in-form Denis Kudla in straight sets in Montreal, while in Toronto, Gajdosova came the closest to advancing to the main draw, extending Brit Heather Watson to three sets.

The Canadian ATP and WTA events alternate each year between Toronto and Montreal; in 2016, Montreal will host the women and Toronto the men.