With a win over Kristina Mladenovic in Washington DC on Tuesday, Sam Stosur won her 500th career match and took her winning streak to six. 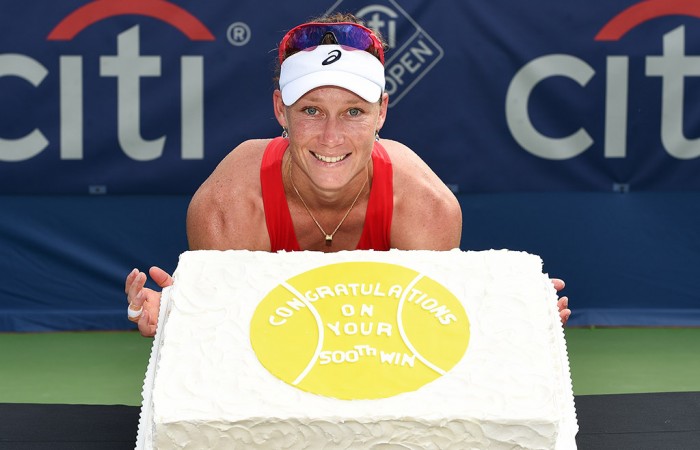 Update 11.35am: Australian Sam Stosur recorded her 500th career victory on Tuesday, moving into the second round of the Citi Open with a comprehensive 6-2 6-2 win over France’s Kristina Mladenovic.

Stosur, 31, had her career highlight at the 2011 US Open when she claimed her maiden Grand Slam title, beating red-hot favourite Serena Williams in the final.

She is the seventh active woman with at least 500 match wins – across all levels, including at ITF, WTA, grand slam events, main draw and qualifying – and at least one major singles title.

“Guess it proves how old I am,” Stosur said after ending Tuesday’s match by serving it out at love, closing with an ace at 187 km/h.

To mark the occasion, the second-seeded Stosur was presented on court with a white-frosted cake, decorated with a yellow tennis ball and the words, “Congratulations on your 500th”.

Asked whether one of those victories stands out from the others, Stosur scratched her head and joked: “Maybe the US Open final?”

When Stosur was asked what milestone she’s thinking about next, she replied, “Let’s go for 501 tomorrow.”

She will face Irina Falconi of the United States in the second round.