Sam Stosur has reached her second final of the season at the WTA event in Bad Gastein, Austria, yet her opponent in the decider remains a mystery. 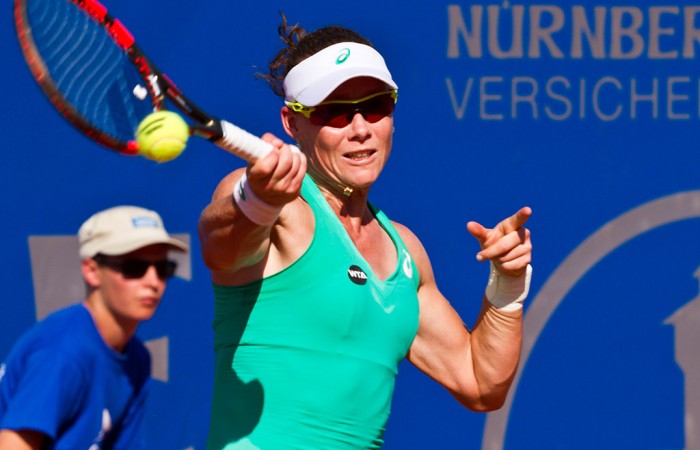 Sam Stosur has reached her second final of the season, beating Anna Karolina Schmiedlova of Slovakia 6-1 7-5 at the WTA event in Bad Gastein, Austria.

The 23rd-ranked Australian, who won her seventh career title in Strasbourg in May, will now play top-seeded Sara Errani or fellow Italian Karin Knapp in Sunday’s final.

That semifinal was held over until Sunday morning due to inclement weather.

Errani and Knapp will face off at 10am, with the winner to play Stosur later on Sunday after a suitable rest.

The second-seeded Stosur avoided break points and won five games in a row from 1-1 to comfortably take the opening set.

She missed four break points in the opening game of the second set and fell 5-2 behind, before again winning five straight games.

“I don’t think you can ever expect to make it to the final, but I obviously hoped I would, and that I was going to be able to play well and play the tennis that I think I’m capable of,” Stosur said.

“I think I’ve been able to do that, especially the last couple of days; I feel like I’ve played really well so I’m definitely happy with my result here so far.”

Asked her thoughts on her final’s opponent and whether or not she had the advantage of going into the title match fresher, Stosur remained cautious.

“Finals are never easy, and I still don’t know who I’m playing,” she said.

“I’m really excited to be in the final and know I’m playing well, so I think I’ve got a good shot, but it’s certainly not going to be easy.”