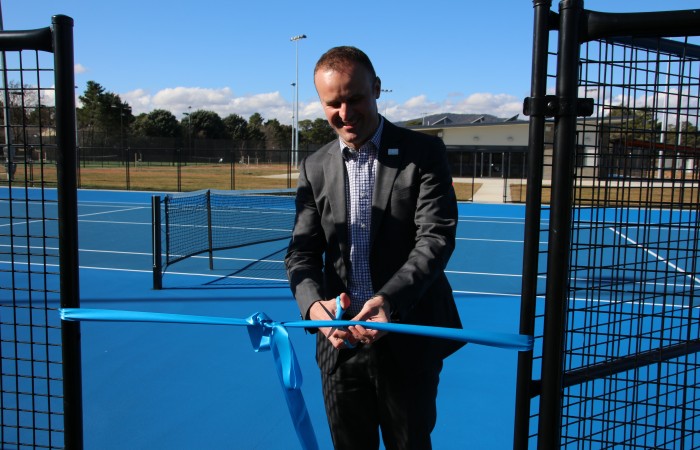 The $10.5 million redevelopment has been a joint collaboration between Tennis Australia, Tennis ACT and the ACT Government.

“It is pleasing to come together with representatives from Tennis ACT and Tennis Australia to formally open this wonderful new facility,” Mr Barr said.

“The redevelopment of the tennis facilities on this site has been talked about for well over a decade and to stand here now, surrounded by new courts, a wonderful central pavilion, refurbished clay courts and the huge four-court indoor centre, is really a satisfying moment.”

“Continuing to service community tennis, the Canberra Tennis Centre will provide improved opportunities for coaching, junior programs and elite development, while also allowing the ACT to resume a prominent place on the Australian tennis events calendar, commencing with this November’s Canberra International.”

“It has been a long journey but we are thrilled to offer the Canberra community one of the best facilities in the country. People of all ages and abilities have the opportunity to get out on court and get involved with our great sport,” Triffitt said.

“The new facility has already attracted a number of events to the city, and provides a training base for elite players such as our own Nick Kyrgios,” Triffitt concluded.