John-Patrick Smith's run at the Hall of Fame Tennis tournament in Newport has come to an end with a semifinal loss to the in-form Rajeev Ram. 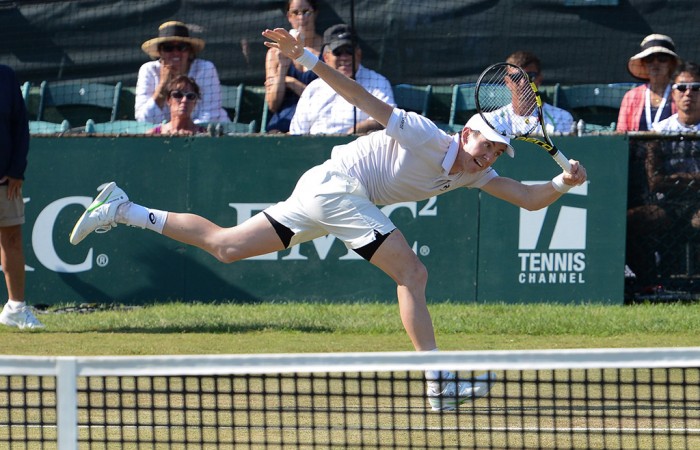 John-Patrick Smith’s run at the Hall of Fame Tennis tournament in Newport has come to an end with a 6-4 7-6(4) semifinal loss to American Rajeev Ram.

Ram said Smith, a surprise semifinalist, made things difficult for him during their match.

“It was tough today,” Ram said. “The wind was really swirly. I had a lot of trouble with my serve at the start, but I did everything else well.”

Ram nabbed the first set with a break in the third game.

In the opening game of the second set he surged back from a 40-love deficit on Smith’s serve to break the Aussie, only to drop his serve in the next.

Although Smith’s aggressive play at the net kept Ram under pressure, the American was able to pull out the tiebreaker and book a return to the final.

“J.P. did a really good job rushing the net and forcing me to pass him,” Ram said. “Fortunately I was pretty locked in today.”

Karlovic, who has battled pain in his right arm, shook off a slow start that saw him broken at love by his American foe in his second service game.

He quickly regained the break and took control, finishing with 14 aces in the one-hour, 23-minute match.

Karlovic, who fell to Lleyton Hewitt in last year’s final, kept Sock under pressure throughout the second set, the American saving one match point in the 10th game with a stinging forehand before netting a forehand two points later to surrender the contest.

“Rajeev will be tough to play against in the final,” Karlovic said. “He hits a very good volley and it’s hard to pass on this court.

“Hopefully my arm will feel good and I’ll be able to produce some aces.”