Kyrgios to fight through injury scare

Nick Kyrgios took a cautious approach to training after sustaining a sore groin ahead of Australia's Davis Cup tie, yet captain Wally Masur thinks he should be fighting fit come the weekend. 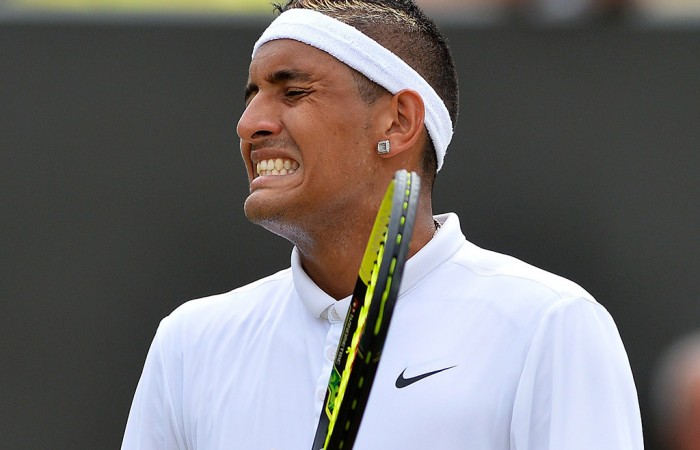 Davis Cup captain Wally Masur is nervous – and it’s not Nick Kyrgios’ sore thigh that has him on edge.

Kyrgios sent a scare through camp at training on Wednesday when he was forced to the sidelines with a problem right thigh.

The 20-year-old looked proppy as he stretched out the area for several minutes.

Kyrgios was able to return to training but cut short his session shortly after to ice his leg.

Masur played down any fears Kyrgios would miss this week’s Davis Cup quarterfinal against Kazakhstan, saying the world No.41 will be fit to return to the courts on Thursday.

“He played over three hours of tennis yesterday. He played a bit of basketball this morning.

“He’s got an opportunity to get on that match court tomorrow. No dramas there.”

Kyrgios has been slated to play a key role in Australia’s attempt to book a first semi-final appearance since 2006.

Masur has no hesitation that Kyrgios will be able to handle the responsibility.

“He’s an amazing player. But you don’t just walk into those situations. There’s a lot of hard work to be done.

“Roger Federer, the greatest player of all time, won his first major at 21.

“So I don’t think Nick’s under illusions as to how hard he has to work to achieve that.”

On paper, Kazakhstan’s team of journeyman shouldn’t pose much of a threat.

Mikhail Kukushkin is their top ranked player at No.63 in the world, while Aleksandr Nedovyesov (No.115), and Andrey Golubev (No.155) are lower down in the tennis pecking order.

But Masur has put his charges on red alert against a country that has made the Davis Cup quarterfinals in four of the past five years.

“They beat Italy in the first round – Fabio Fognini and Andreas Seppi – pretty significant wins.

“Golubev is a super talented player. Kukushkin has established himself as a real threat inside the top 100. And Nedovyesov plays great Davis Cup.

The players shared plenty of laughs with Masur as they continued to train in the Darwin heat on Wednesday.

Masur is keeping his cards close to his chest, with Sam Groth, Thanasi Kokkinakis and Lleyton Hewitt in a three-way selection battle to join Kyrgios in the opening day’s singles action.