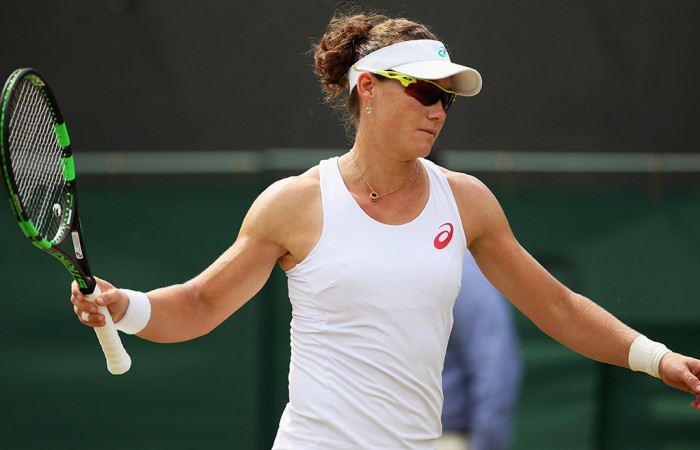 Australia’s top-ranked player has never reached the fourth round at Wimbledon, an unwanted record she looked like shaking early on in the 6-2 6-0 third-round defeat to the USA’s Coco Vandeweghe on Friday.

When the 31-year-old broke her 47th-ranked opponent at the first available opportunity, her Wimbledon woes looked like evaporating before her eyes.

She would’ve been filled with confidence as she served with the opportunity to go 3-0 up in quick time.

Instead, Vandeweghe stormed back to wrap up victory in one hour.

“It was capitulation and it snowballed into everything,” a frank Stosur admitted.

Stosur’s game disintegrated and she became increasingly flustered as the unforced errors, which totalled 20 when she sent a booming forehand two metres wide on match point, mounted.

“She practically gave me her first service game (then) all of a sudden got a bit shaky and I lost serve,” said the former US Open champion.

“Things just kind of went from that to worse very quickly. It really got away fast. It’s just a bad day.”

With the court wide open, balls managed to find the frame of her racquet rather than the middle and Vandeweghe’s counter-punching style delivered regular dividends.

“She played fine. She hit the ball in more times than me,” Stosur said.

“I gave her lots of errors and lots of free points.”

After chalking up a fifth double fault to go down 5-0 in the second set, Stosur showed her frustrations by throwing her racquet at her kitbag.

Vandeweghe, who will face sixth seed Lucie Safarova in the fourth round, has now won three straight matches against Stosur and also bundled her out of this year’s Australian Open.