Sam Groth has cast sentiment aside in a match against compatriot and housemate James Duckworth to book a dream Wimbledon date with Roger Federer. 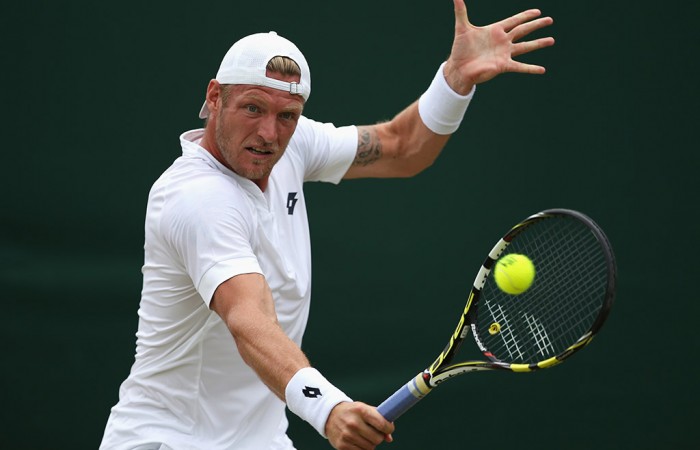 Late-blooming Sam Groth has cast sentiment aside to book a dream Wimbledon date with Roger Federer.

Groth beat good friend and Wimbledon village housemate James Duckworth 7-5 6-4 7-6(6) on Thursday to join Bernard Tomic, Nick Kyrgios and Sam Stosur in the last 32 at the All England Club.

Apart from guaranteeing himself the single biggest pay day of his career – a cheque for at least $A157,300 – Groth’s victory secured something money can’t buy.

The 27-year-old will likely play Federer on Saturday on tennis’s most hallowed court where the great Swiss has won a record seven titles with a priceless opportunity to make the second week.

“In one way it’s a dream come true from where I’ve come from. But at the same time I feel like it’s a match I can definitely win.

“I feel like if I serve well and play aggressive and do what I need to do I can give him some real problems.

“I’m not going to be favourite. I’m going to be the big underdog, but I feel like I can win.”

“With that serve on these kind of courts in these conditions, he’s got a good shot against anyone,” he said.

“He’s going to hold serve a lot of times. He’s probably (going to) take a few blokes to tiebreakers quite a few times and then anything can happen.

Groth and Duckworth each gained direct entry to this year’s tournament for the first time and neither had made the second round.

But the experience couldn’t have been more awkward on Thursday, with the pair also sharing the same coach – who was unable to watch on Thursday – and a house in London’s SW19 with Groth’s girlfriend.

They couldn’t share a place in the third round, though, and Groth took the spoils after hammering down 24 aces in what ultimately proved the difference.

Owner of the world’s fastest recorded serve, a 163mph (262.27kmh) missile launched in South Korea in 2012, Groth was broken just once throughout the two-hour, seven-minute encounter and always had Duckworth under the pump.

Groth grabbed the only break of the opening set to go ahead 6-5.

But he had to fend off seven break points in the 12th game before finally clinching the set with an unreturnable delivery on his third set point.

The Victorian charged to a 4-0 lead in the second set, with Duckworth retrieving one break back before Groth closed it out to take a stranglehold on the match.

In a third set of few opportunities for either player, it was Groth who again won the pressure points in the tiebreaker.

Duckworth had a set point on his own serve, but put a backhand half-volley into the net.

Opportunity lost, Duckworth then netted a return as Groth sealed the most important win of his career.