Housemates to clash at Wimbledon

Sam Groth and James Duckworth share a house in Wimbledon village, the same coach and the same goal of a third-round appearance - and they have to play each other for it. 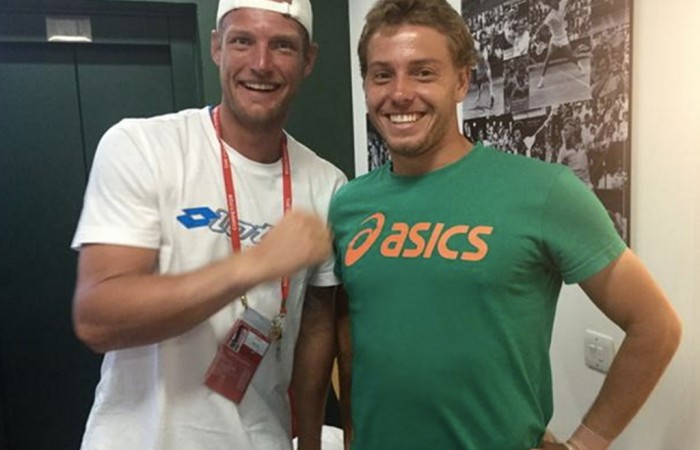 Australia has converted its biggest Wimbledon contingent in 20 years to its best start to the tournament since before the turn of the century.

But friendships are about to go on hold for two of Australia’s nine stars into the second round at the All England Club.

But, unlike the old days when Australian greats like Neale Fraser, Ashley Cooper, Fred Stolle, Roy Emerson, Lew Hoad and Ken Rosewall used to room together and eat with one another before clashing in Wimbledon finals, Groth and Duckworth won’t be sharing breakfast on Thursday morning.

“Look, it’s a tough situation and we’re obviously mates now but we’ll go out there and do battle and we’ll be mates again afterwards.”

The pair’s coach Ben Mathias won’t even be courtside for the high-stakes showdown.

“Ben’s going to the pub and having a few beers and watching on TV, he’s just told us,” Groth said.

“It’s interesting. It could be a bit tense in the house the next couple of days.

“We travel together, we practise together and we’re good mates so in one way it’s great there’ll be an Aussie in third round.

“But I’ve got to try and treat it not like it’s a friend (I’m playing), but like it’s another match and a match I feel like I can win.”

Groth, 27, and Duckworth, 23, set up the all-Australian encounter with watershed wins on Tuesday.

He squandered a match point in that defeat and dubbed it the worst experience he’d endured on a tennis court.

The Sydneysider admitted he had flashbacks to Paris during a toilet break after dropping the fourth set on Tuesday.

“If I’d lost another Grand Slam match from two sets to love up, I would have been pretty devastated,” Duckworth said.

“It went to my head a little but. But then I went to the court, got on with the job and I’m really happy to have won in the end.”