Sam Stosur is hoping a more laidback approach will translate into a more pleasurable - and longer - Wimbledon experience. 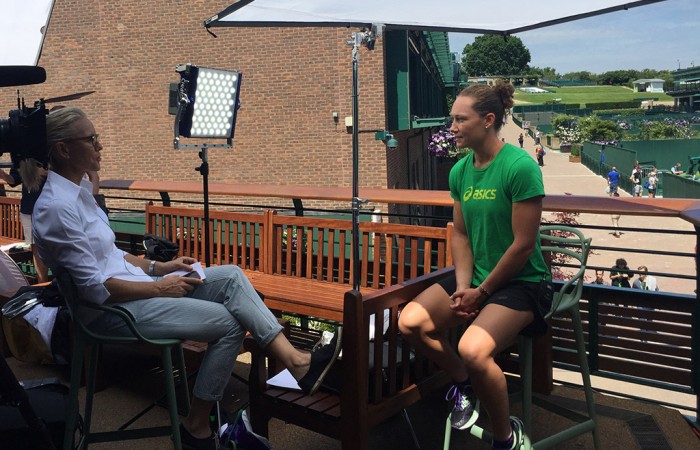 Sam Stosur is hoping a more laidback approach will translate into a more pleasurable – and longer – Wimbledon experience.

A stress-free Stosur has arrived at the All England Club noticably less anxious after failing to venture beyond round two in 10 of her 12 previous visits.

The one-time US Open champion admits three gut-wrenching French Open final and semifinal defeats have left her psychologically scarred entering Wimbledon in the past.

So this year, she took two weeks off to freshen up after departing Paris, furious at misfiring in a third-round flop against Maria Sharapova.

“The last few years, I’ve come in with a few different mindsets and probably not necessarily been over French Open results mentally,” Stosur said ahead of her first-round match-up on Monday with Montenegro’s 20-year-old world No.92 Danka Kovinic.

“Then I come here and, all of a sudden, I’m just absolutely fried and frazzled and I go out there on court in the first round and freak out and lose and it’s all a big disaster.

“In a lot of sense, I don’t feel like that at all at the moment and so, this year with taking that break, I’ve been able to approach it a little bit differently and hopefully that will make a difference.”

Stosur says she and David Taylor are also more relaxed and pragmatic after reuniting before Roland Garros and that helps too.

A first-up loss to former Wimbledon quarterfinalist Tsvetana Pironkova in Eastbourne in her only grasscourt outing before the championships wasn’t the end of the world.

“We didn’t panic about anything,” she said.

“We’d set out a bit of a plan to take that break before Eastbourne and then continue on after here so it’s important to try and look at it like that.

“So I’m trying to keep everything in perspective, take it day by day and look at the big picture.”

Stosur, whose big-picture focus is on qualifying for the top-eight season-ending championships, knows little about her first-round opponent.

“But those young players who are coming up the rankings, who most people have never heard of, can be quite dangerous in their own right,” the 31-year-old said.

“They’ve got nothing to lose, they go out swinging and are super excited to just be here and run on adrenaline.

“So it’s going to be difficulties in different ways. I can’t take it lightly. I need to be just as ready for this first round as if I was in the quarterfinals.”

Daria Gavrilova is the only other Australian in women’s singles action on the opening day of the championships.

The 21-year-old faces Romania’s 29th seed Irina-Camelia Begu in her first match since pulling out of her scheduled Eastbourne quarter-final against Sloane Stephens with a recurring abdominal strain.

The injury is effectively the result of winning too many matches this season, but the fast-rising world No.39 is confident she’ll be fine for Wimbledon after a few days’ recovery and treatment.

“It’s been a great year for me,” Gavrilova said.

“I don’t think I’ve ever won that many matches at that level so I’m feeling good.”