John Millman has overcome a littany of injuries to line up at Wimbledon for the first time in his career, and will be cheered on by his family. 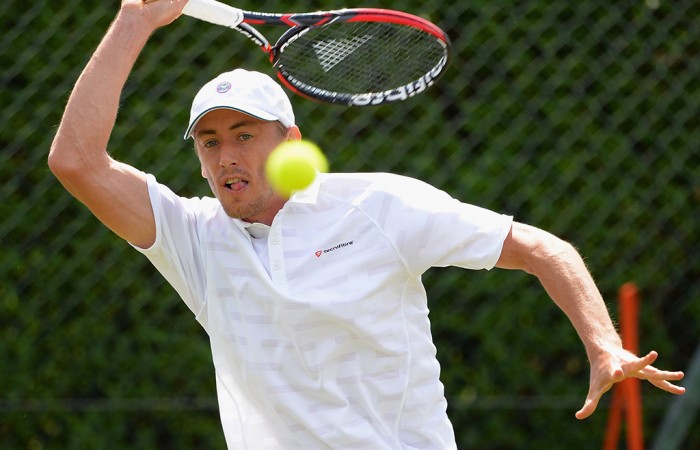 The curious case of John Millman, whose tennis gets better as his battered body gets older, is a real-life tennis fairytale.

At 26 and two years after he thought the opportunity had probably passed him by, Millman will make his Wimbledon debut.

Until qualifying last Thursday, the Queenslander had never even set foot inside the All England Club gates.

“It’s one of those things you dream about and I’m just glad I could make it a reality. It’s an amazing feeling,” Millman said ahead of his first-round clash with Spanish 19th seed Tommy Robredo on Monday.

“To be honest, I got a bit lost trying to get here. I’ve still got to find my bearings.

“So, yeah, it’s everything I imagined and more.”

Until now, the journeyman’s biggest thrill in an injury-riddled career featuring just two previous Grand Slam main-draw appearances – both ending in first-round losses at the Australian Open – was taking a set off Roger Federer in front of his home supporters in Brisbane in January.

Millman will share this latest magical experience with his mother Shona and father “Big Ron” after shouting his folks a trip to SW19.

He said his mum was “getting a little bit tipsy with my sister” while at home monitoring his final-round qualifying encounter through live scoring on the internet.

But she still managed to book a flight 12 hours later and will be at Court 11 for the last match on day one of the championships (starting about 3am Tuesday AEST).

“It’s going to be a really big buzz to have them over here,” he said.

“It’s a pretty special place, not just for me but for them. To watch their son, I think it’s going to be really exciting.

“I’m getting a bit of a pay day this week so definitely it’s the least that I can do for my parents. They’ve been great support for me and never pushed me one way or the other with my tennis. They just wanted me to be happy and enjoy myself and that’s exactly what I’m doing.

“So I couldn’t think of a better way to repay them just a little bit. I’ve still got a little way to go just to even things up with them.”

Millman, who has overcome knee issues, two serious shoulder operations and a year out of the game to make it this far, is guaranteed a cheque for £29,000 ($A60,000).

“My four sisters couldn’t make the trip,” he said.

“I had to maybe make third round for them to come over. Maybe that’s later in the week.

“But they’ll be following me back home. I’m just proud to be in the main draw, proud to be joining this strong Aussie contingent here.”