Jason Kubler ended a four-year absence from grasscourt play with an emotional win in the first-round of Wimbledon qualifying. He discussed the signficance of the victory on Tuesday. 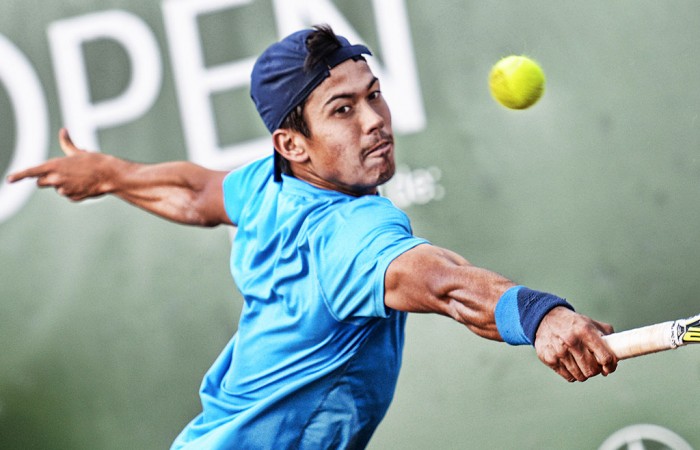 When Jason Kubler clipped the baseline with a forcing forehand and watched as the ball splayed off the frame of opponent Rui Machado’s racquet, for a split second he paused.

Unsure of whether or not the ball was good, he soon had joyous confirmation when the chair umpire announced game, set, match in his favour.

Ordinarily, a first-round Wimbledon qualifying victory might not elicit such an elated, relieved reaction.

But this was no ordinary match.

It was the first time in a staggering four years that Kubler had contested a competitive match on grass; the last time he did so was during the junior Wimbledon championships way in 2011.

Back then he was a teenager plying his trade with a Prince racquet, one who had achieved the world No.1 junior ranking. Now, wielding a Babolat and in his early 20s, having suffered years of chronic knee injuries that had restricted his competitive outings to claycourt events, the victory on Tuesday in Roehampton was hugely significant.

“Oh man, it’s unbelievable,” he smiled shortly after completing his 6-3 6-4 win over Machado.

“Quallies of Wimbledon, it’s unbelievable. I was so nervous the whole match and then I’m so happy I got through one of those matches where maybe you’re not feeling so good because of the nerves.

“I’m so happy I’m able to play on something other than clay. And maybe as I get older, maybe I’ll play on hard court. It’s just exciting; it’s the first time really on grass, and I was able to win, so I’m really excited.”

For Kubler, there has been much to adjust to.

That of the health of his knees, which have long been susceptible to swelling and require frequent physio treatment and scans. The acceptance that he would have to spend years toiling at claycourt events all over the world, his sole source of ATP points.

And more recently, after appearing to have largely overcome his knee problems for the time being, adapting to different surfaces, movement and bounces.

“It’s so different,” he said of playing on the lawns.

“It’s not so bad playing on the backhand (whereas the movement to the forehand is different). I’m getting better, I’m getting more used to it, getting used to the bounce.

“(I’ve got) no pain. We’ll see. It’s never any pain (generally), it’s normally after the match or during the match so I’ll have to ice now and see the physio. But it felt alright there, I don’t think I really put myself in too many bad positions.”

Next up for Kubler is Aleksandr Nedovyesov of Kazakhstan.

And should he progress – and get a step closer to Wimbledon qualification – a whole new raft of possibilities opens up.

“US Open (is in the plan) for sure, but then I’m tossing up (between preparation options) because there’s a lot of claycourt Challenger and ATP events before the US Open,” he said.

“So I have a choice really with the US Open Series (events on hard court) or the ATPs on clay so depending how I go here, you never know.

“My goal in tennis was to see how good I can be.”