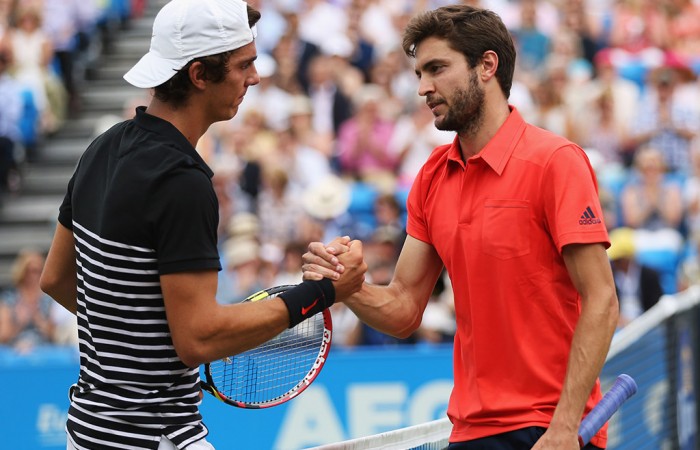 Thanasi Kokkinakis has suffered a straight sets second-round defeat to Frenchman Gilles Simon to end an emotional week for the exciting Australian prospect.

The 19-year-old, who defeated Frenchman Jeremy Chardy after flying back home to Adelaide to be with his family and ailing grandmother over the weekend, came out firing on centre court and won the opening nine points of the match, before going on to lose in straight sets.

He dedicated the Chardy victory to his grandmother but said there would not be another chance to head home in the near future.

“I doubt I will go back again,” he said.

“She’s still going for now. She’s struggling, though. It’s a bit of a waiting game, really, which is disappointing. You feel like you can’t really do anything. That’s what it is.

“She’d prefer me to go out and play and do what I do. Happy I got the win for her yesterday but today wasn’t to be.”

Kokkinakis had on Tuesday admitted he was feeling fatigued following the three-set victory over Chardy.

The effects of a 33,000km round trip and spending nearly 48 hours on planes over three days also appeared to take its toll on the youngster.

“I just wasn’t feeling confident with my shots. I felt bad for everyone watching, really,” Kokkinakis said.

“It was a bit disappointing. I felt like it was one of my poorest performances in a while.”

Later, Kokkinakis, who partnered Australian veteran Lleyton Hewitt in the doubles, suffered a second defeat of the day, going down to French duo Pierre-Hugues Herbert and Nicolas Mahut 7-5 6-3.