UPDATE: Bernard Tomic has cut short the comeback of Tommy Haas to become the second Aussie through to the quarters of the ATP Mercedes Cup in Stuttgart. 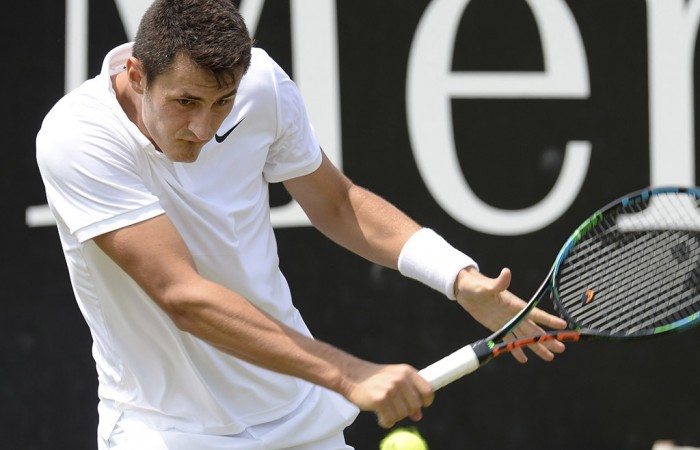 Bernard Tomic continued his pre-Wimbledon build-up on grass by overpowering Tommy Haas 7-6(6) 6-2 on Thursday to reach the quarterfinals in Stuttgart.

The fifth seed from Queensland cut short the comeback week of the 37-year-old Haas, who was playing for the first time in more than a year since undergoing shoulder surgery.

Tomic had to battle to close out victory, with former ATP number two Haas salvaging three match points in the penultimate game on the new grass of the Weissenhof club, which was changed from clay in time for this edition.

Tomic concluded victory with a love game to advance to the last eight in just over an hour and a quarter, losing just four points on his serve for the entire match.

The 22-year-old winner broke twice with Haas saving six other break points as the wild card-entry veteran worked his way back into the sport after yet another lengthy injury pause.

Tomic’s win gave him bragging rights in Germany after losing to Haas three years ago on grass in Halle when the Aussie retired in the first set due to an abdominal injury.

He joins compatriot Sam Groth in the last eight.

The Spaniard, who won the German title in 2005 and 2007 when the tournament was played on clay, struggled for more than two-and-a-half hours to overcome the 63rd-ranked Cypriot.

Nadal is aiming for a fresh start on grass after a lean clay season in which he did not win a European title.

The world number 10 had his 39-match winning streak at the French Open – where he was the nine-time champion – snapped by Novak Djokovic in the quarterfinals last week.